The recent tastings on the blog have been from a mixed case..and although a few scored higher...this and the Goisot were not only very good..but well-priced..this littl

e gem costs
€ 17...and it's beautifully packaged..
look at that photo!

David Reynaud, along with his mother Marceline, runs this vineyard. Up until 2002 production was sold to the local co-operative but then David decided to bottle under his own label which needed a new cuverie.He makes two cuvées of red Crozes from three very different and separate plots. The top cuvée, Les Croix, is made from grapes from a plot of older vines (over fifty years old). 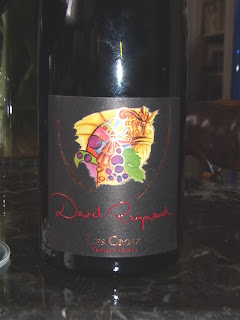 Good note. I wonder if you could recommend several crozes-hermitage wines in the hopes that I can find one of them in the British Columbia market. I love northern Rhone, and I've had a few C-H's before that have proven to be very good values.

Hi Shea,
2005 was an excellent vintage and I recommend these growers:

but do try some of the Côtes du Rhône Villages wines as well....2003 & 2004 even..if they are still around..they may seem overpriced..but the quality is usually very good indeed.
Happy hunting!..and let me know..