The first meeting back in December had been a great success.

Three of us, Robert, Thorsten and myself... set off mid-morning...and made Achern by midday. Some good Italian Pasta at the 'Ciao Ciao' restaurant and then they dropped me off at the Rebstock in Waldulm...and drove the short distance to the hotel where they were staying. I had a room at the top...Number 10...which was available luckily...as the Gasthaus was fully booked...even though the restaurant is closed on Mondays.
This is the reason that we meet here on that day...so that owner Karl Hodapp can enjoy good wines and relax. 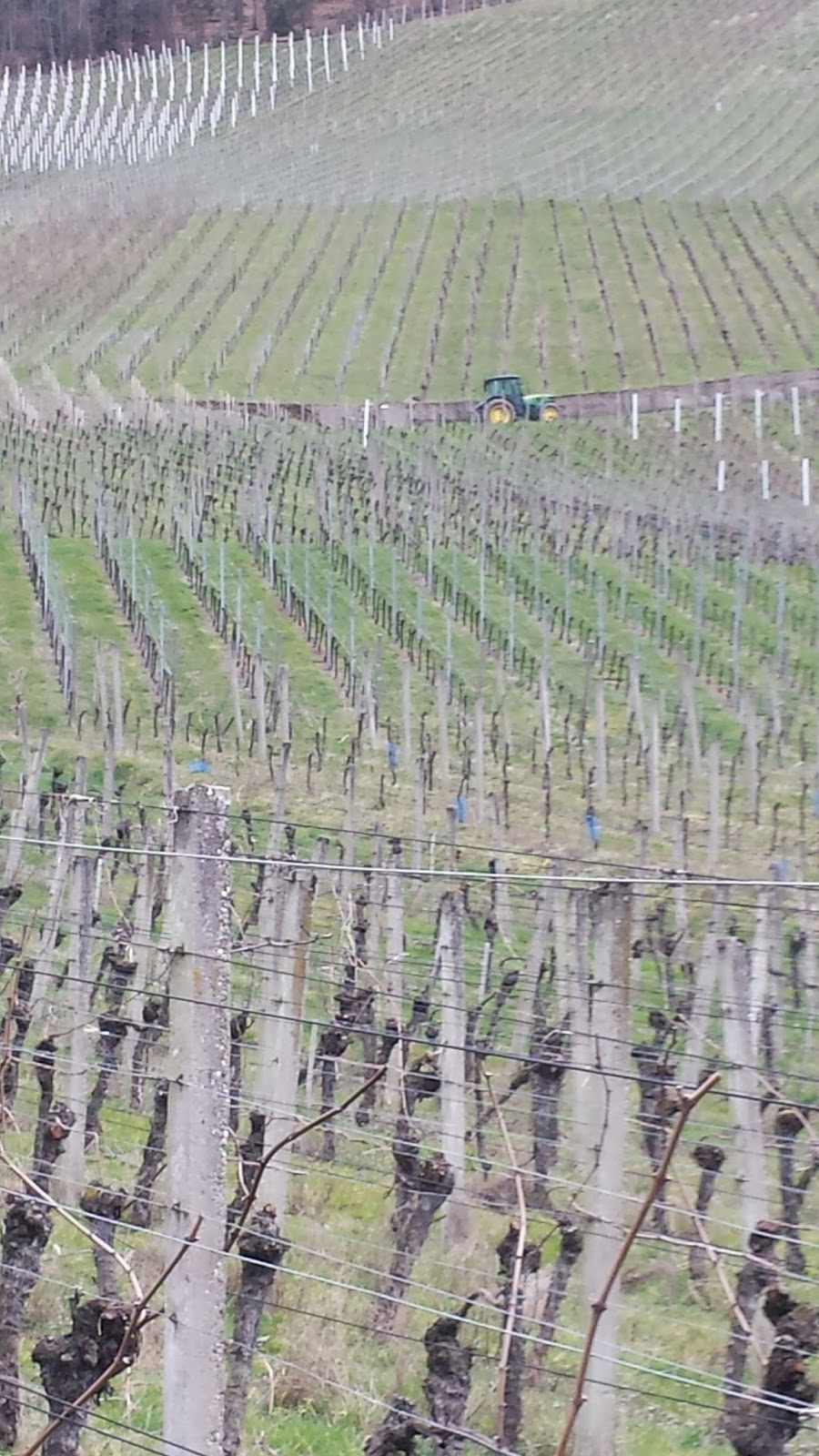 We arranged to start at 5pm...so I took a walk  around the vineyards...looking sparse at this time of year...and I was downstairs an hour earlier to prepare the wines. 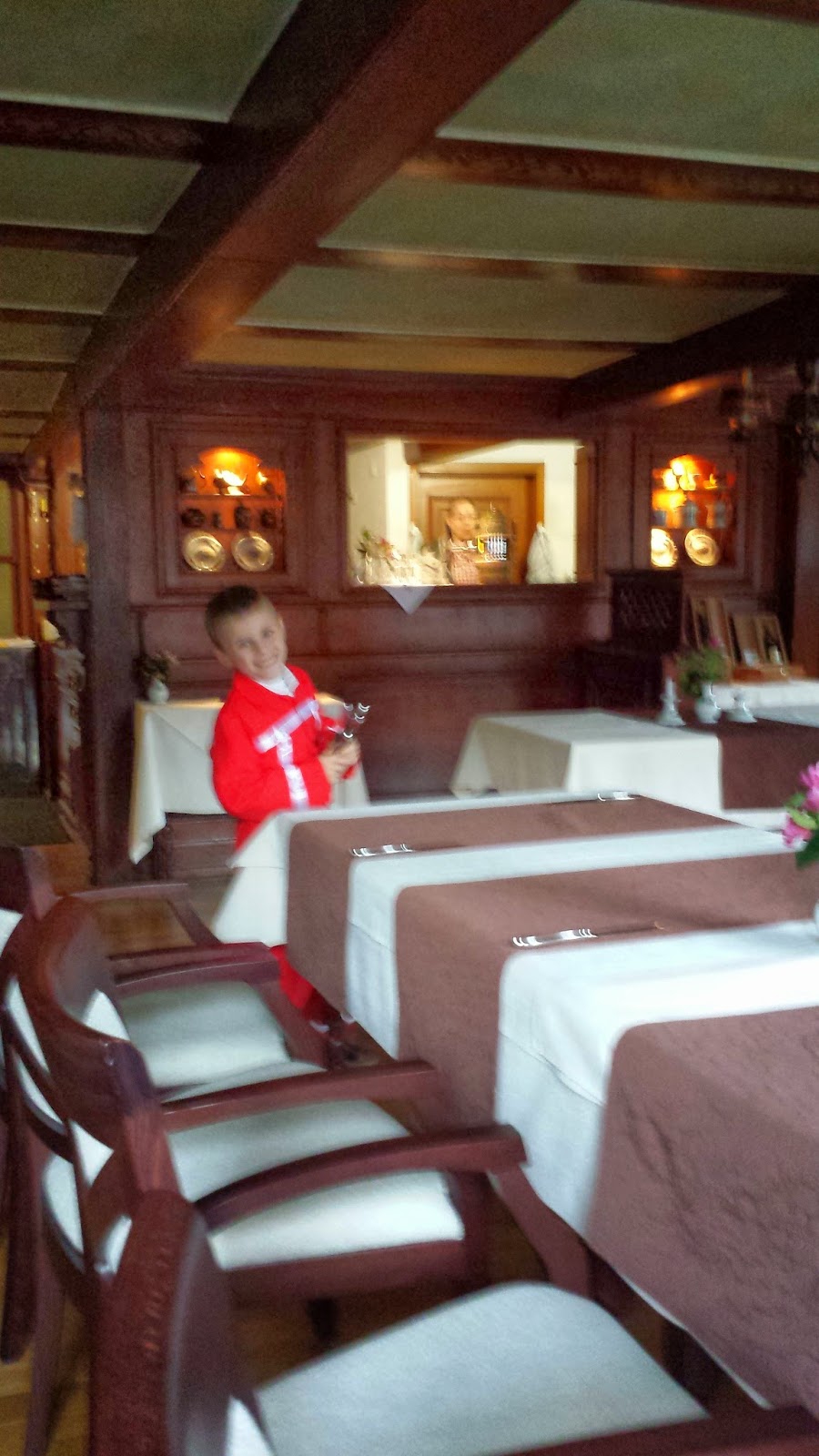 Bastian..Karl's son... was helping his mother prepare the table...it was Mardi Gras weekend and he was in a fireman's uniform.

The whites were opened...and only the Chardonnay had me worried. Leave them to air...and open the reds. I decided none would be decanted...you are damned is you do and you are damned if you don't. 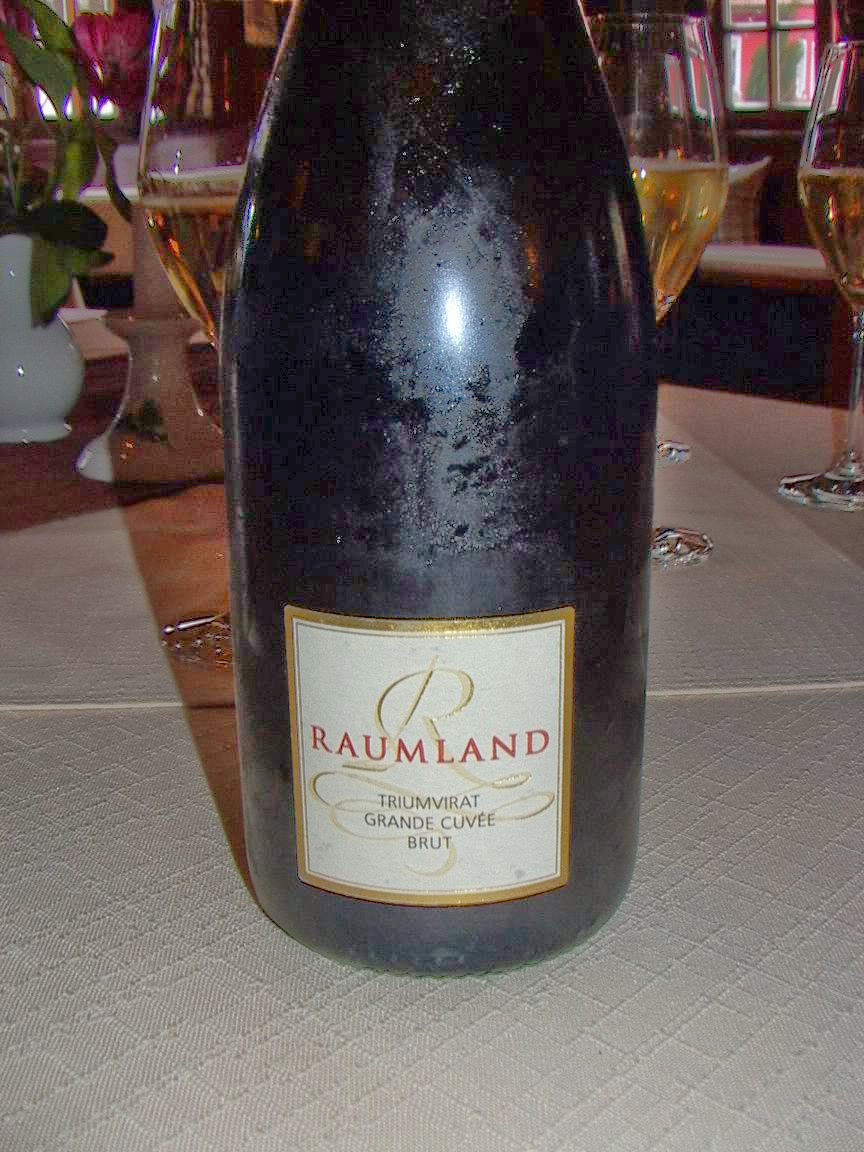 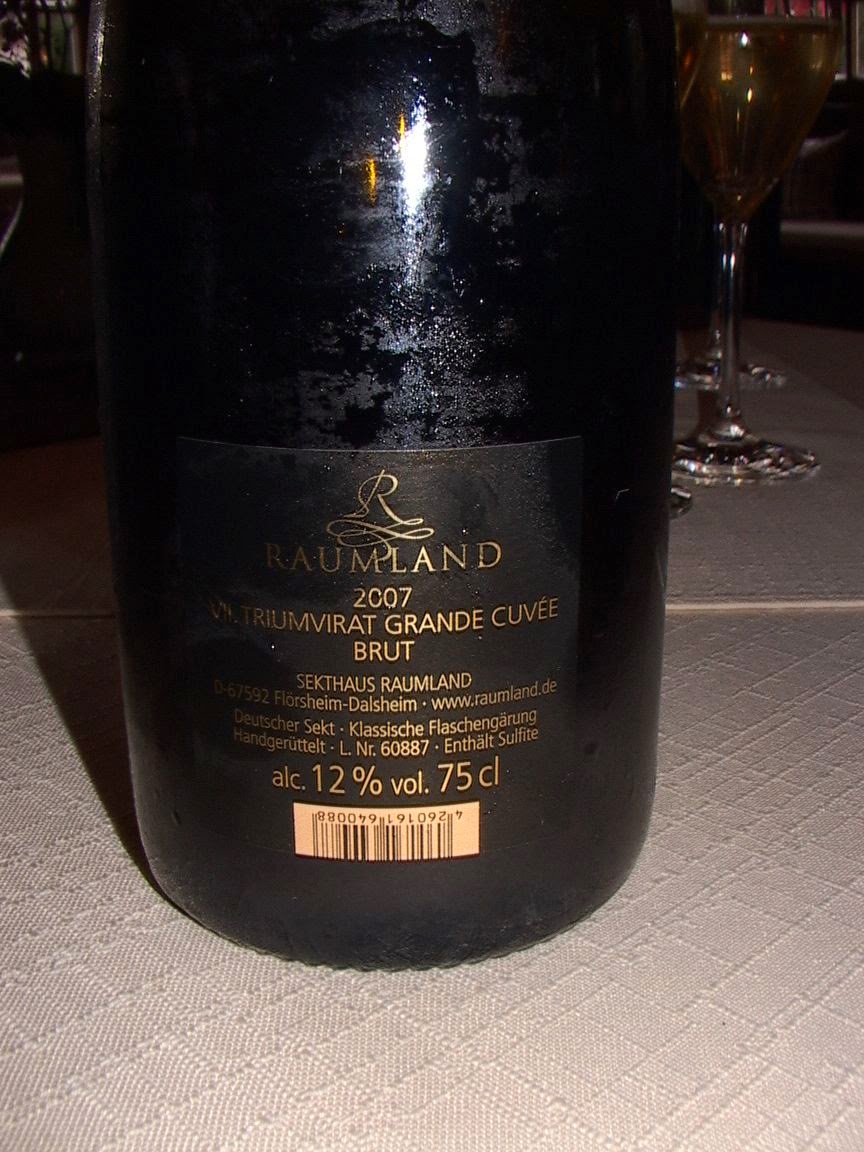 The group arrived and we had a Triumvirat Sekt 2007 from the German property Raumland.
Pleasant...but we were a little underwhelmed.

Karl had prepared a cold table...comprising cold meats and some cheese with fresh bread. It was all we needed I said...it is a wine group...and he could sit and enjoy with us.

The whites...with a theme of 3 Countries, 3 Grapes.
The first two from my cellar. 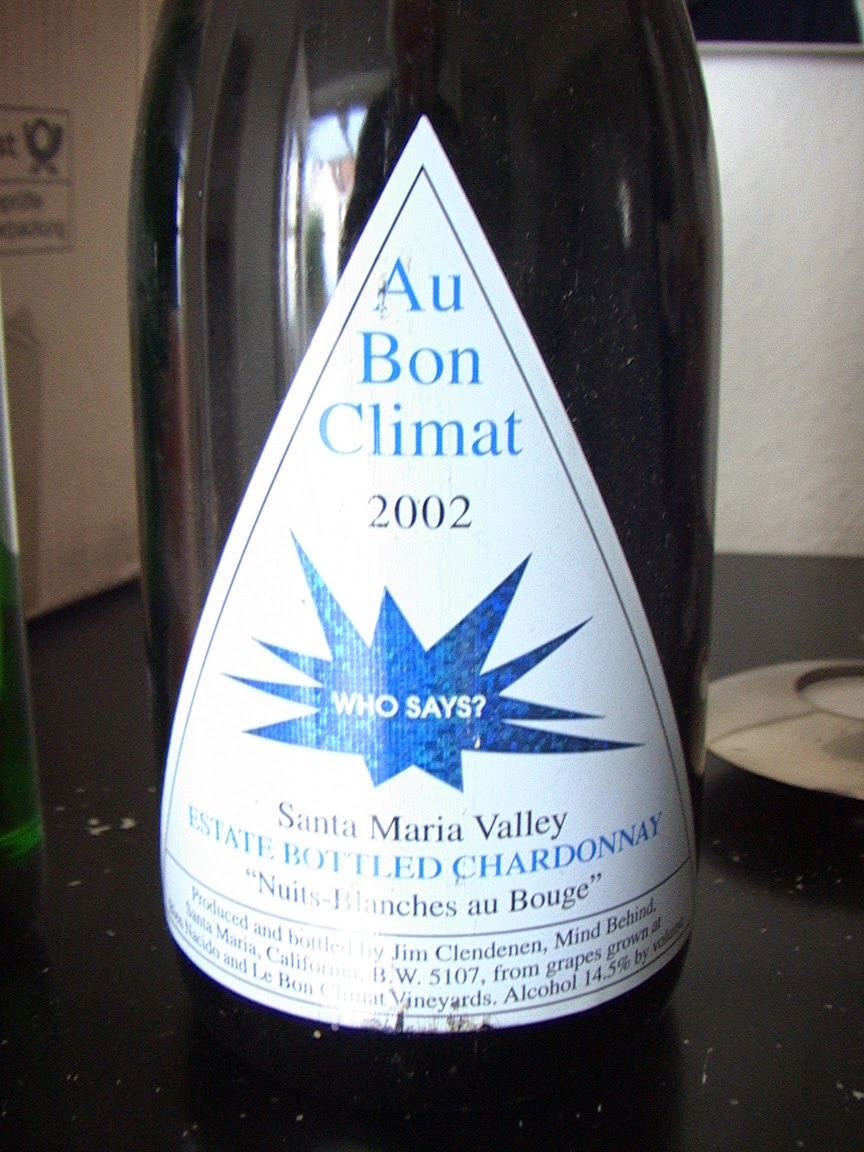 Au Bon Climat Nuits
Blanches-en-Bouge Chardonnay 2002
Santa Maria Valley, California, U.S.A.
I know this wine from a few years ago...and a couple of years ago we would have been OK.
It was drinkable...and a couple of the group quite liked it...but being honest they was an aged tone to it. Only traces of the creaminess and the nuttiness.
Points 16 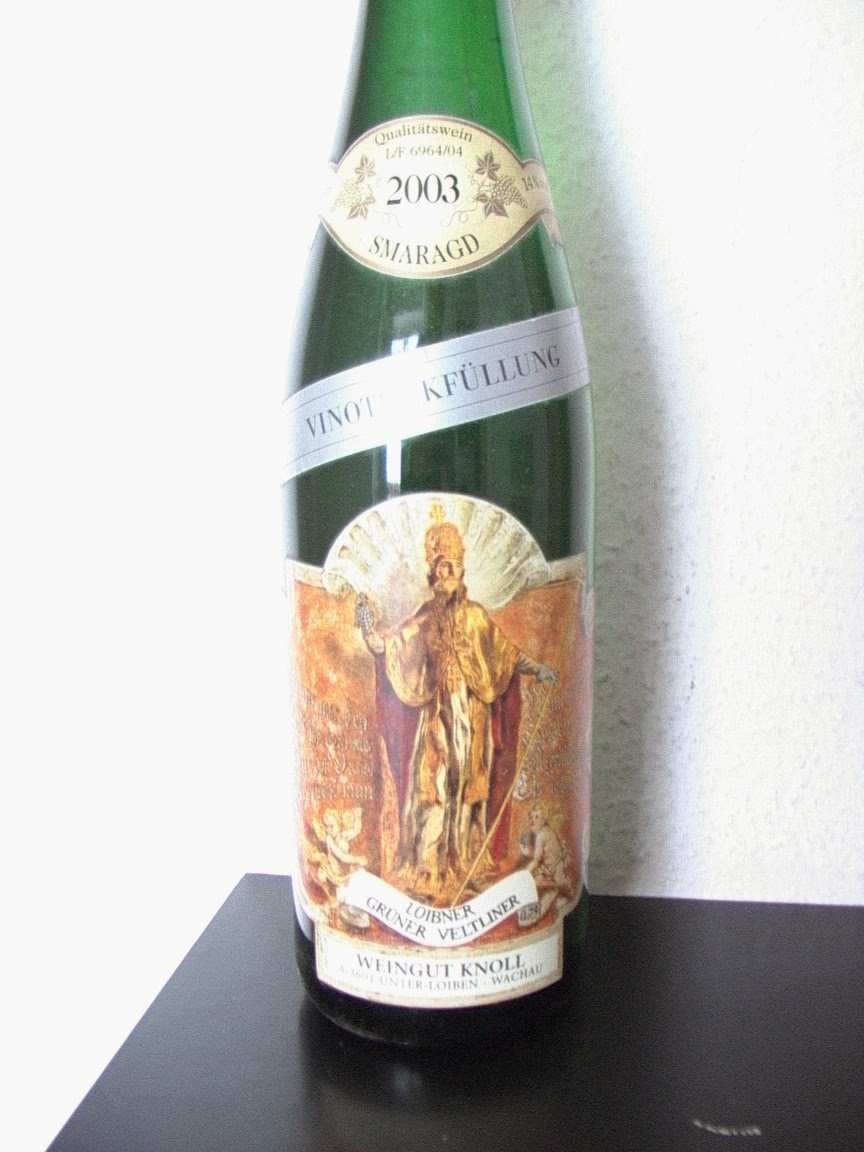 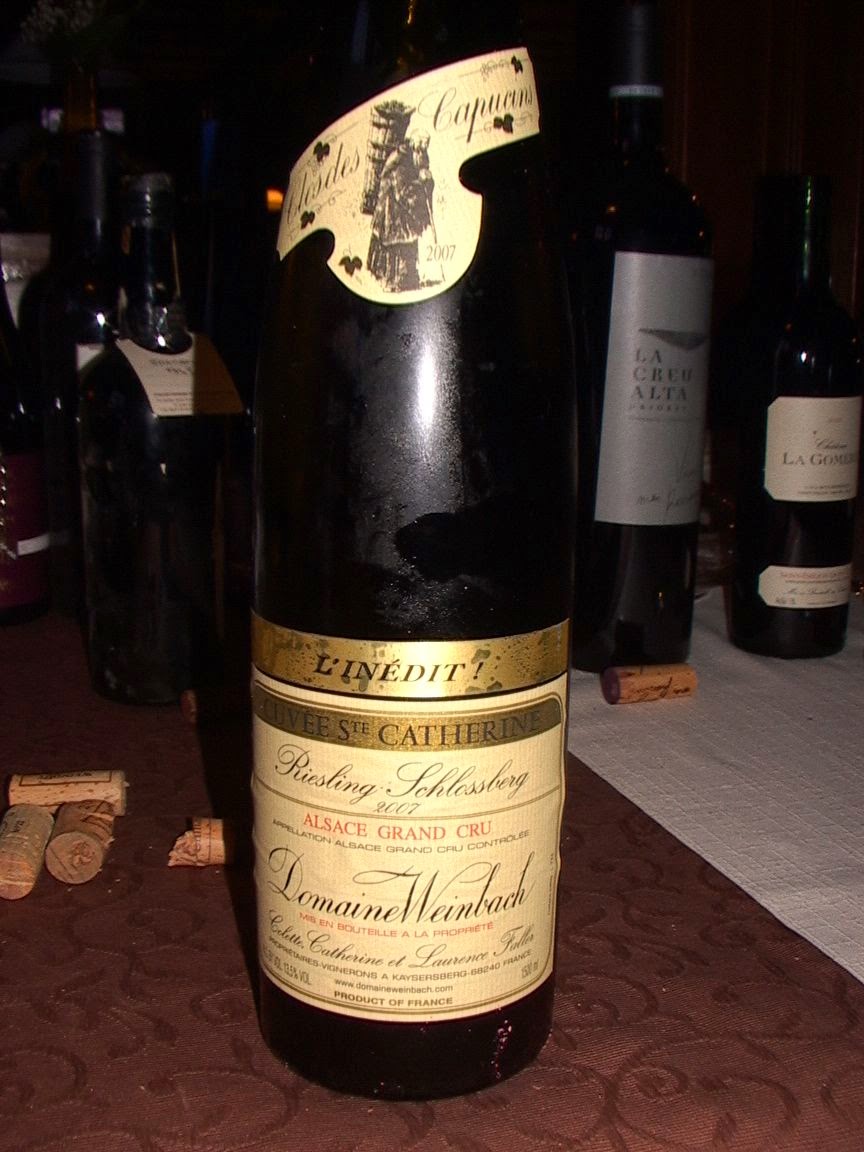 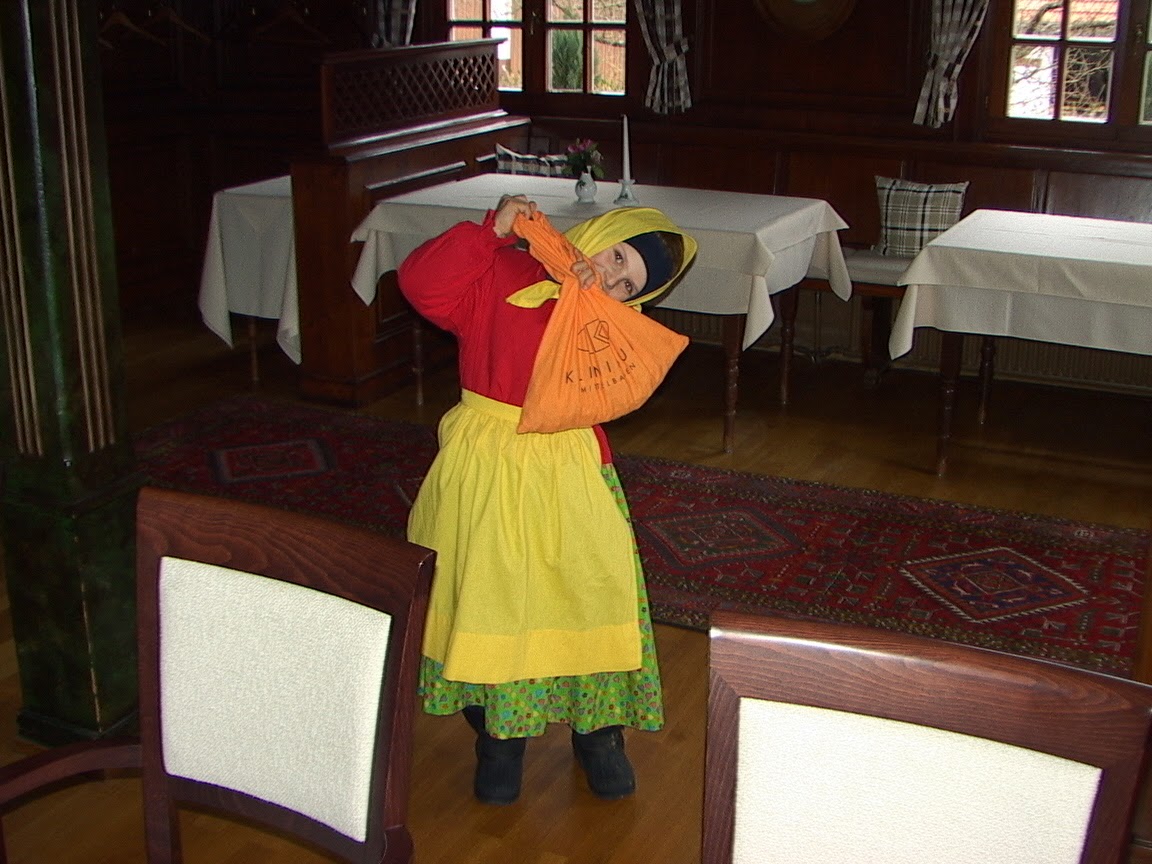 The first red was from Karl's cellar...a highly rated wine from Spain...and in a magnum.
This was served with some warm food...and gave everyone a chance to drink more than a glass. 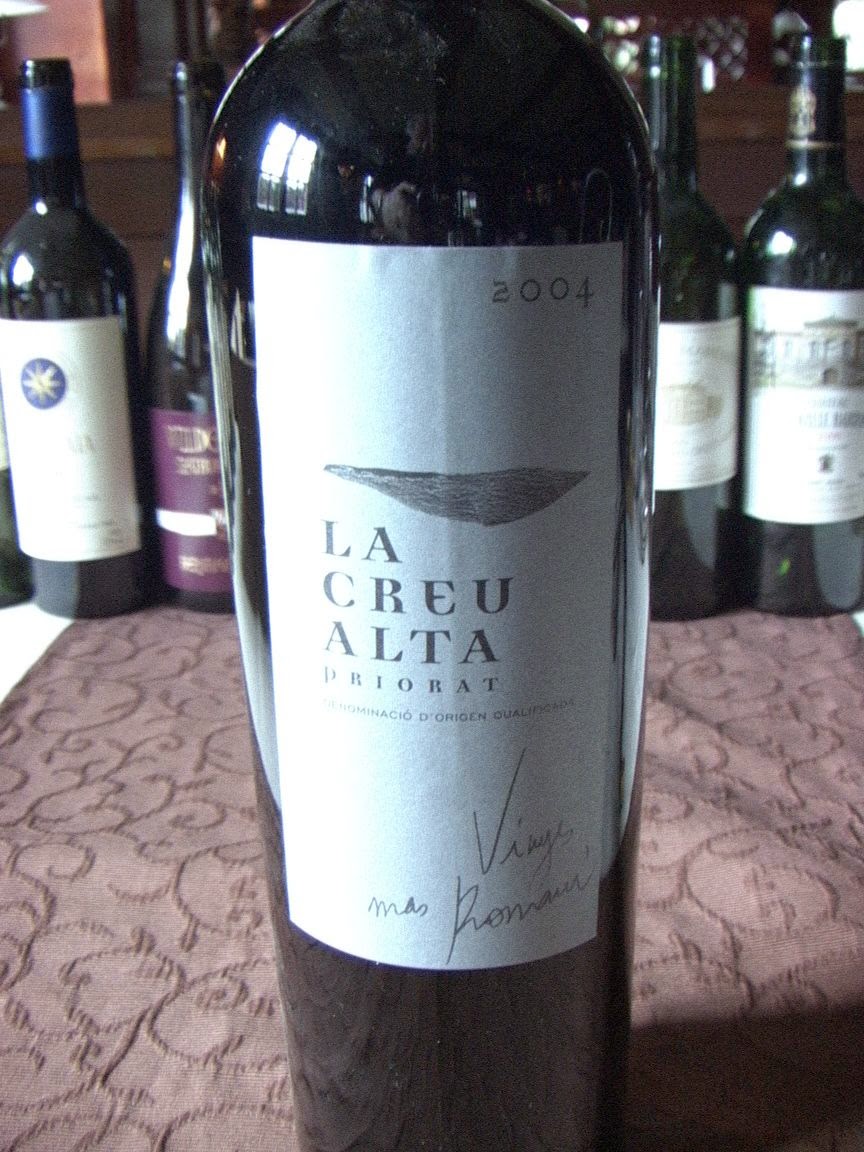 
The next two...Bordeaux from both sides of the river.
Karl offered the Gomerie...I had left the Lafite at the Gasthof last Septenber in the hope that we could both share it....that was before we decided to start a wine group. 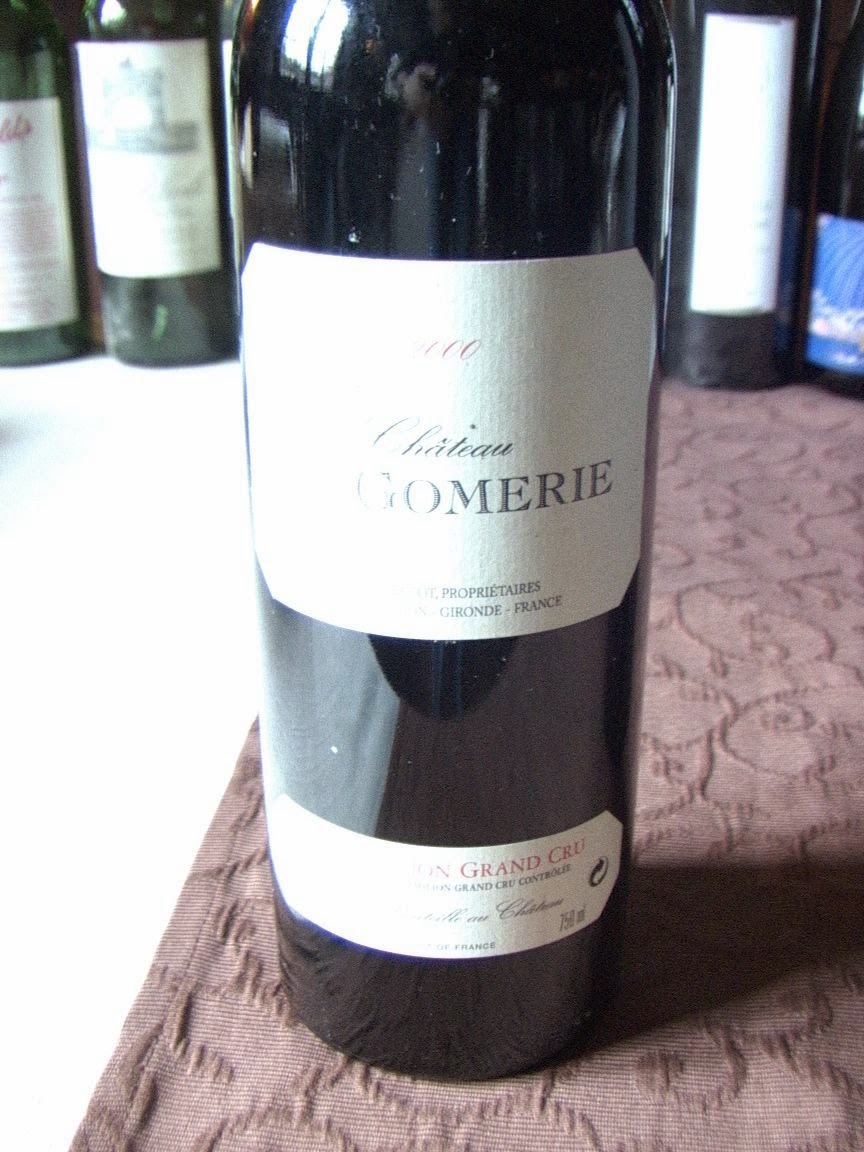 Château La Gomerie 2000
St. Emilion, Bordeaux
It has been ages since I have drank Bordeaux....something I did often 20 years ago...but over the years Pinot Noir has taken up my time.
This has raspberry fruit, spices...with mocha notes. 100% Merlot...and quite plush.
Points 17.5 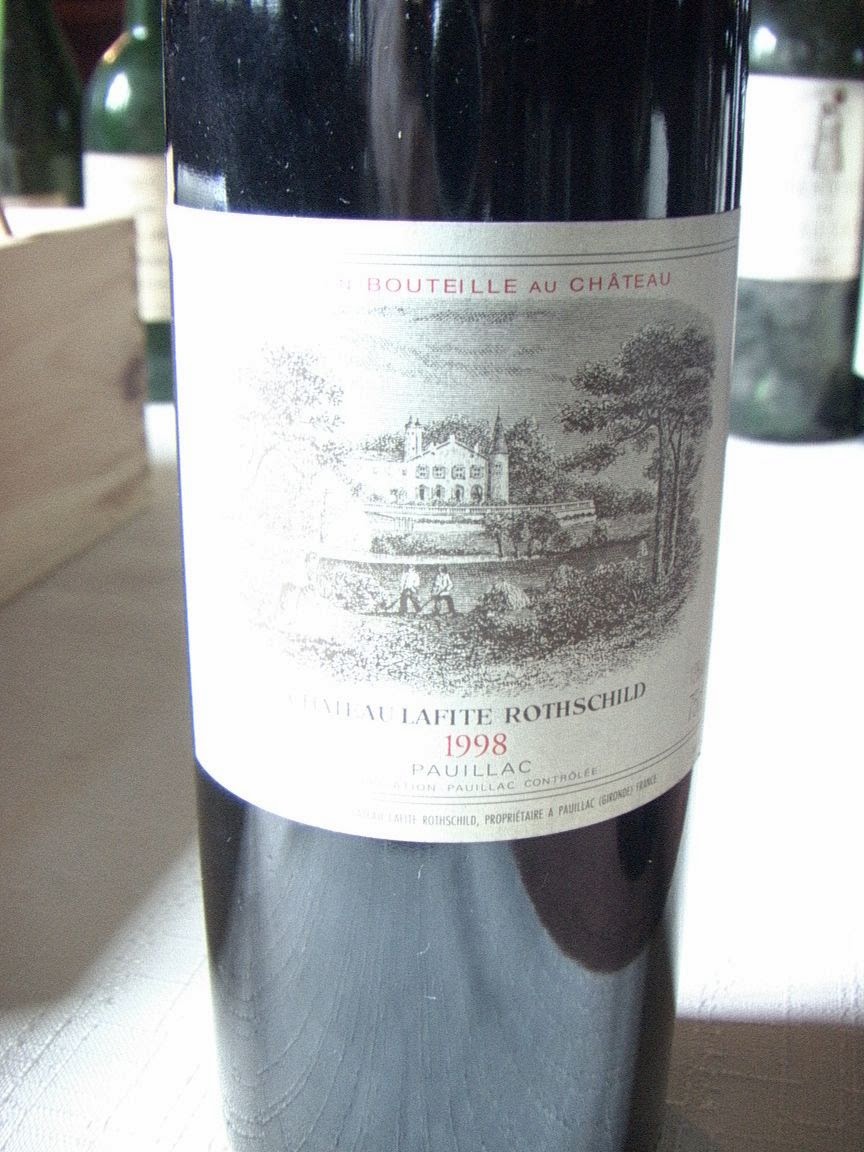 The final wine was a gem from my cellar. I have quite a few Vintage Port...but they never seem to get drunk unless there are a few wine friends around. This was a moment!
I had decanted the previous evening at home...washed out the bottle...amazing dregs...and then popped the goodie back into the refreshed glasware. 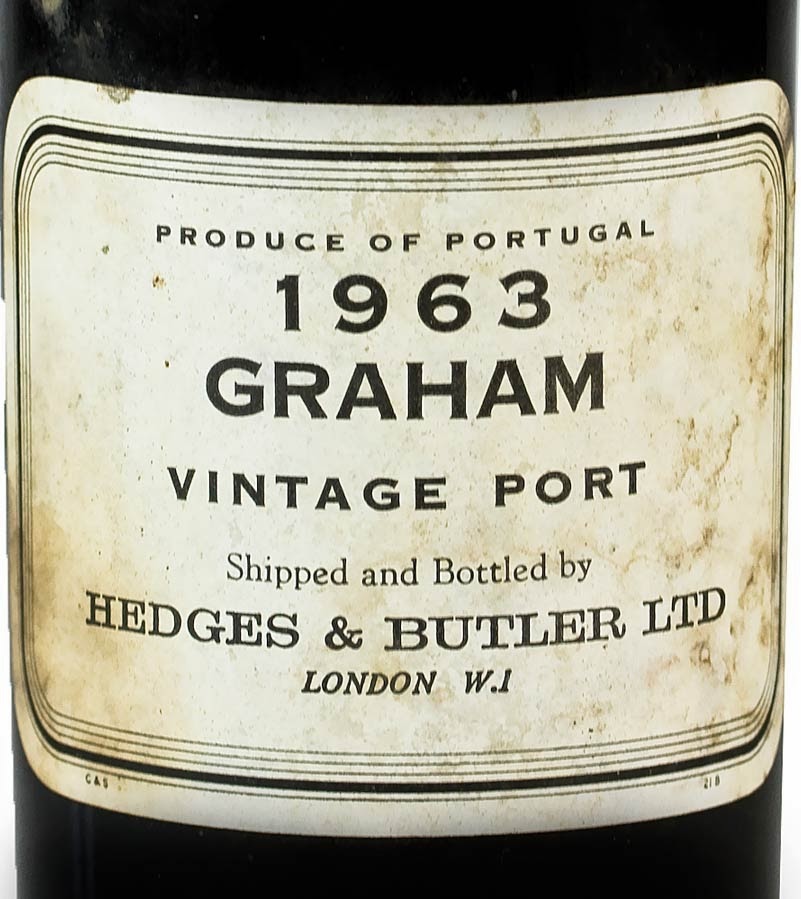 Graham Vintage Port 1963
Douro, Portugal
What can I say?....the group were silent for 30 seconds after the first sip...always a good sign among wine lovers.
This is lovely...fresh fruit...sweet cherries and plums...it just lay back on your palate and caressed you. Great finish.
Points 19 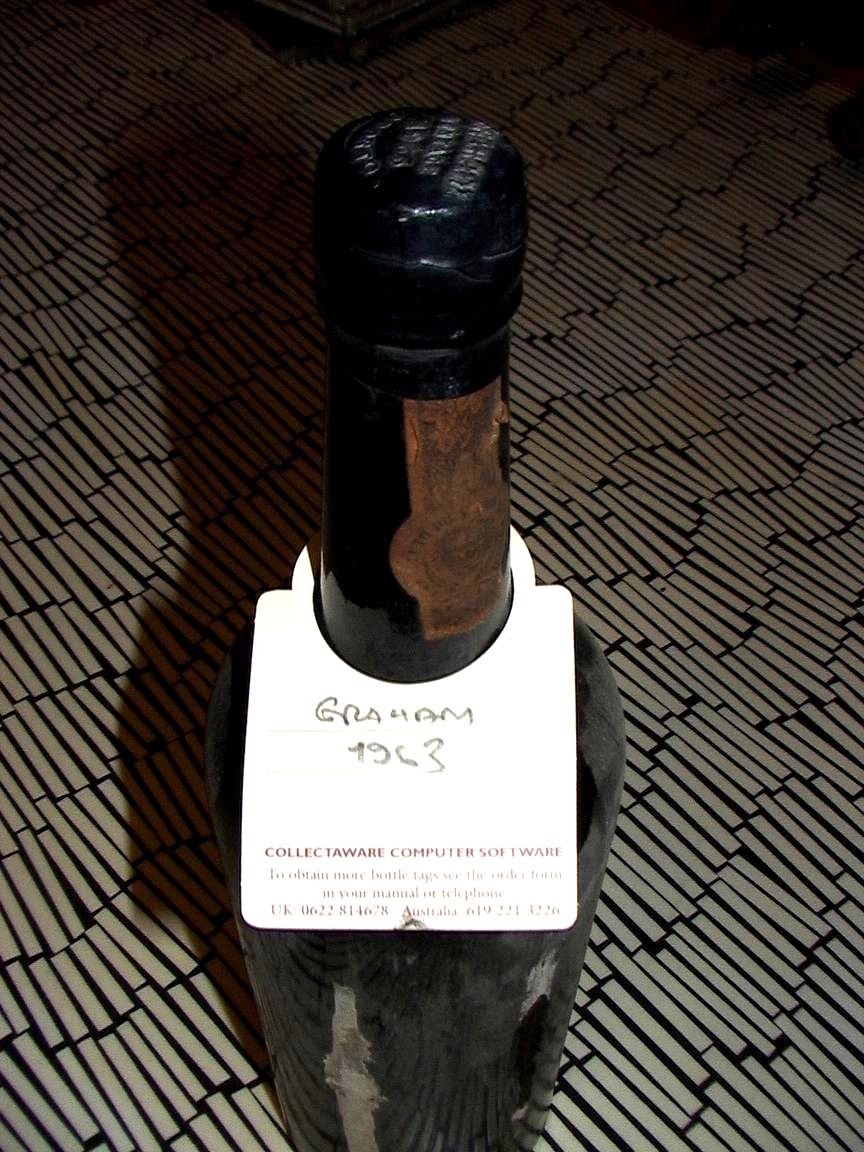 We called it a day shortly after 11pm.....
My two appeared for breakfast in the Rebstock dining room...and then back home.
The next meeting is already in the air...

My annual visit to England to visit my mum
Monday 27.01.2014
Set of mid-morning...and arrived at the port in Rotterdam with over two hours to spare before boarding at 5 pm. As the food generally is not good I had thought about a snack, a good cigar somewhere and an early night. There is no smoker's bar other than a room for those wanting a quick puff of a cigarette...so it was into the brasserie for a sirloin steak...and my first alcohol for 2 weeks...a small beer. 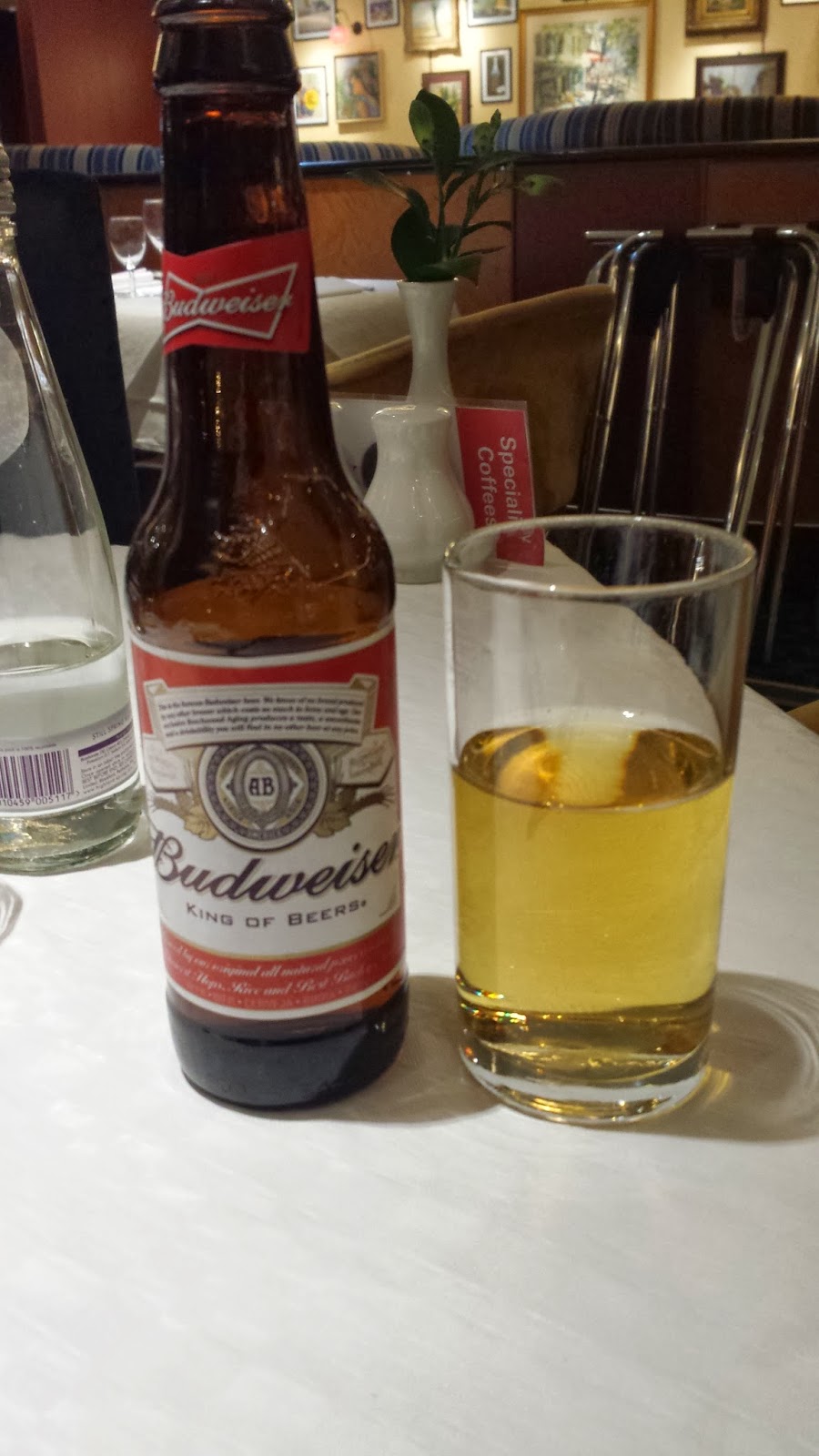 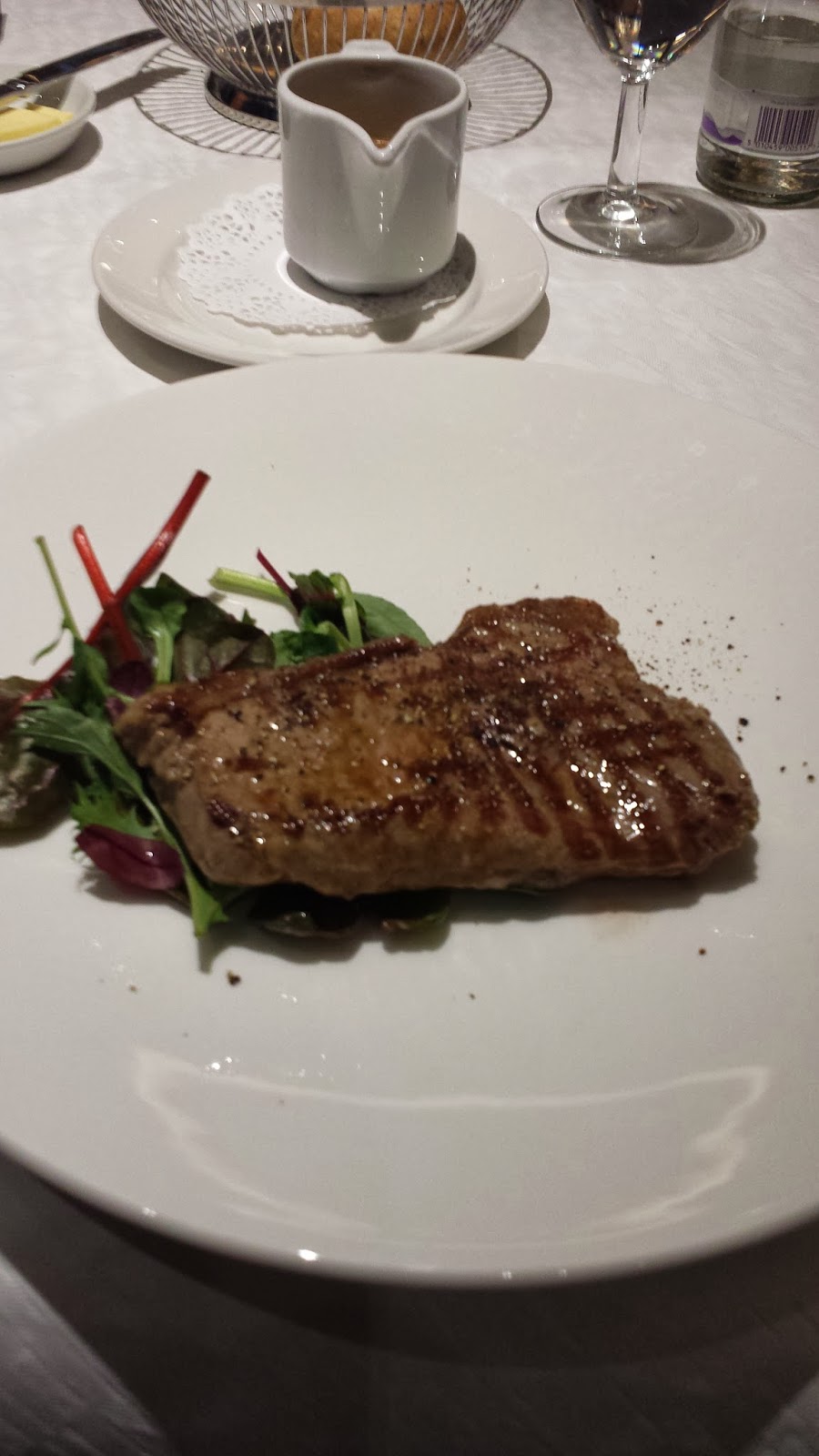 Managed to get to sleep at 10 pm and the trip to Hull was calm.
Tuesday 28.01.2014
Arrived at destination, my mum's home, at 11.00 am.
No great plans for the evening...and I fancied a Thai curry. There is an excellent restaurant nearby...the 'Mews' in Poulton.
I ordered a 'Jungle Curry'  and asked for  more spice. Boy did I get it!
Actually...if you took care not to bite into the many chilis...it became less of an adventure. A cold beer relieved any gasping moments.

Wednesday 29.01.2014
Our first visit to the 'Twelve' restaurant...which is 50 metres from my mum's apartment.
As I wanted to break myself in gently after the long period without wine...something good but not over the top. 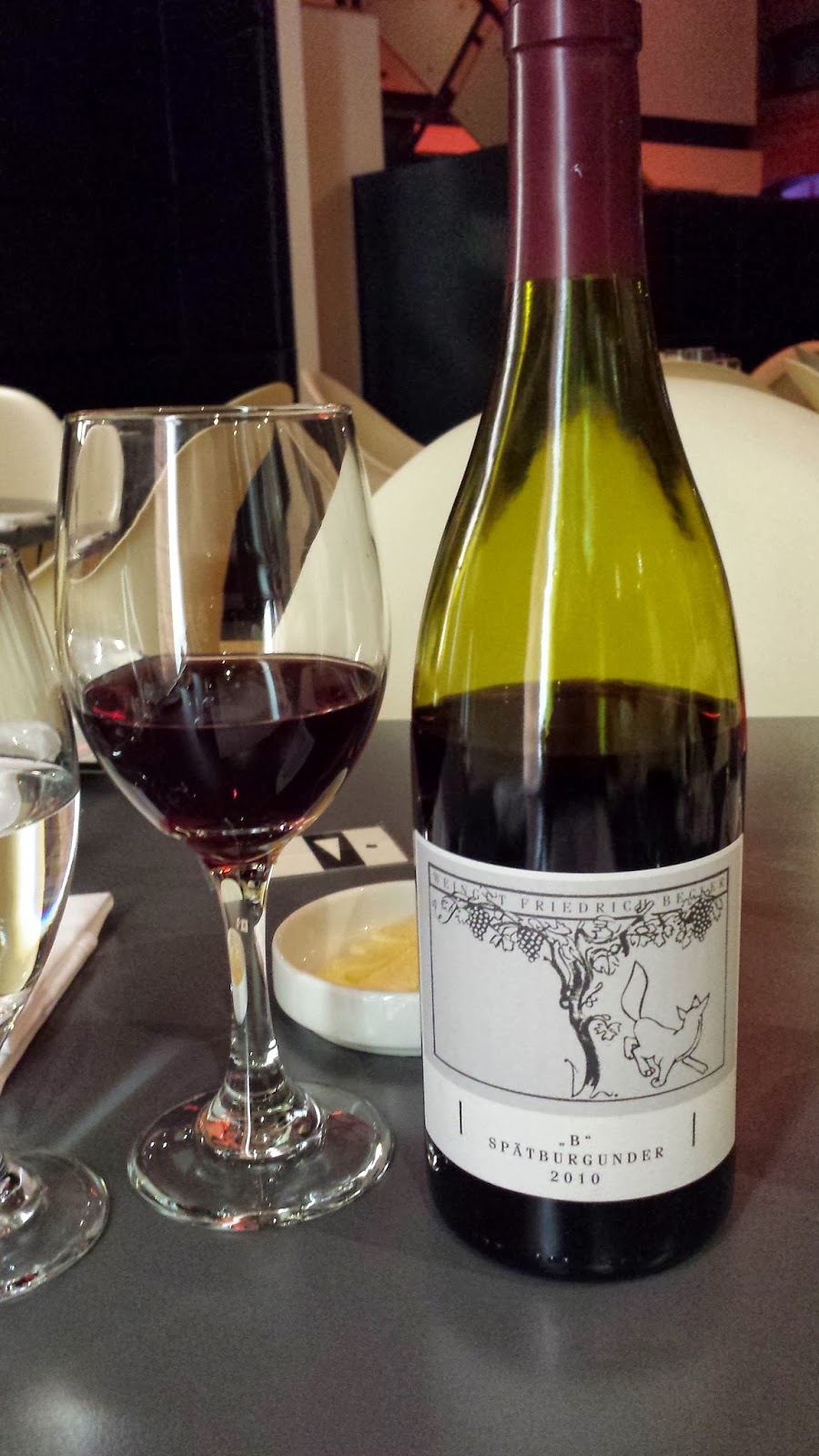 Thursday 30.01.2014
Needing to wind down and get some rest has not been easy...so I visited a Chiro Practice. Wonderful...the 'No Hands Massage'...plus the Reflexoligy really helped. I got back to Mum's at 6 pm...and díd not want to get a taxi anywhere...so we stumbled across the courtyard for another visit to Twelve.
The white wine I had planned to take on the taxi journey was with me. 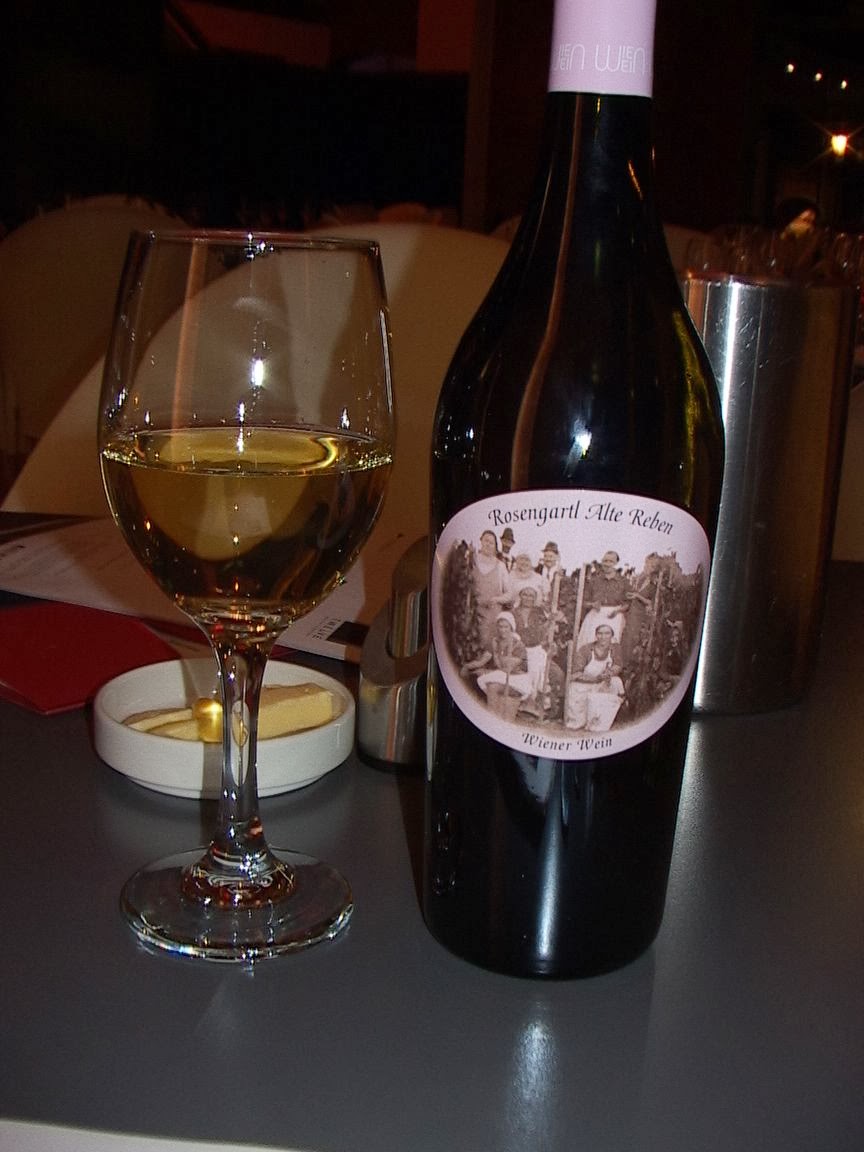 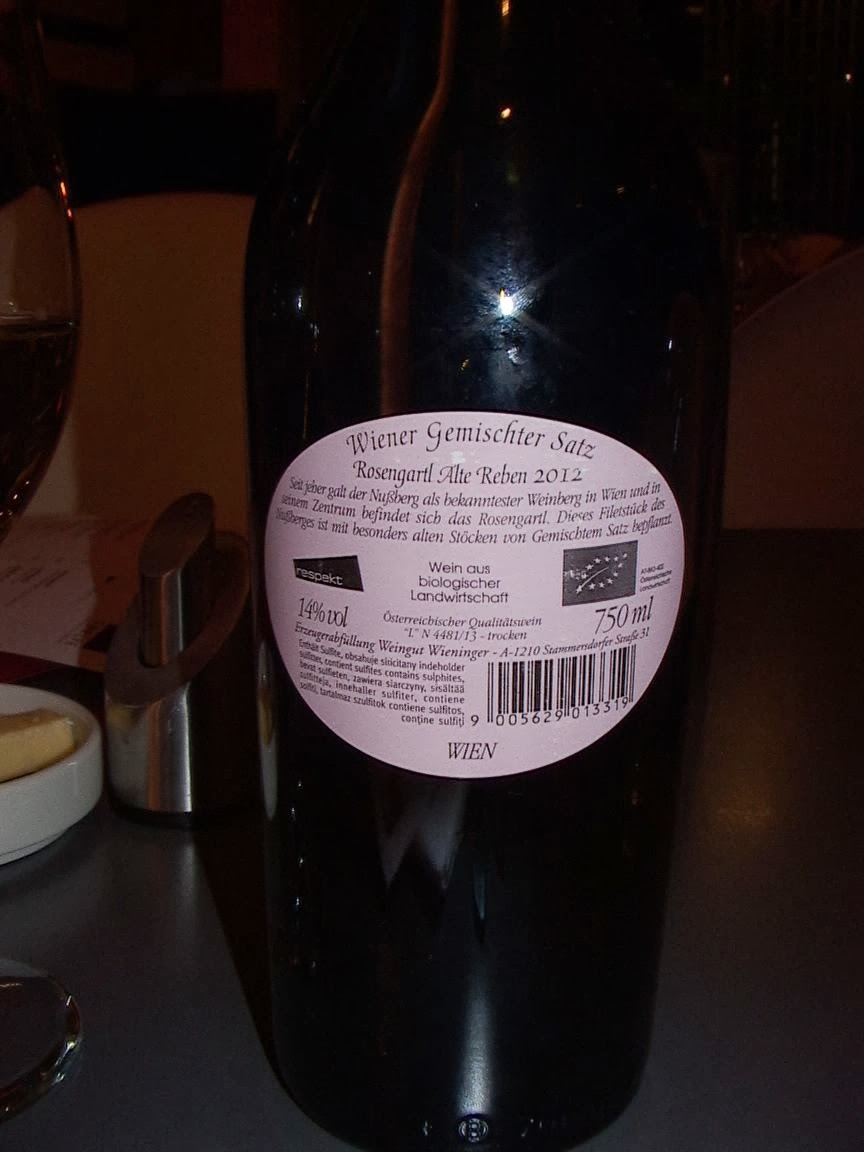 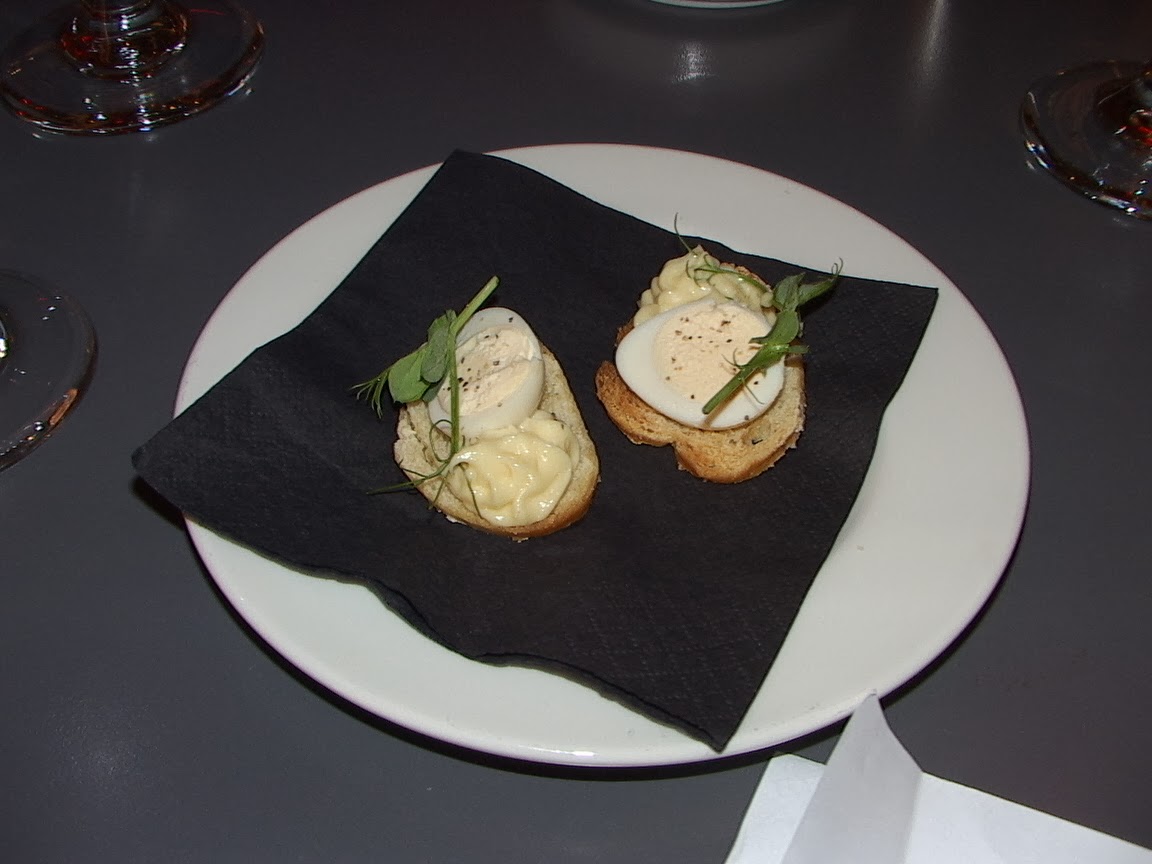 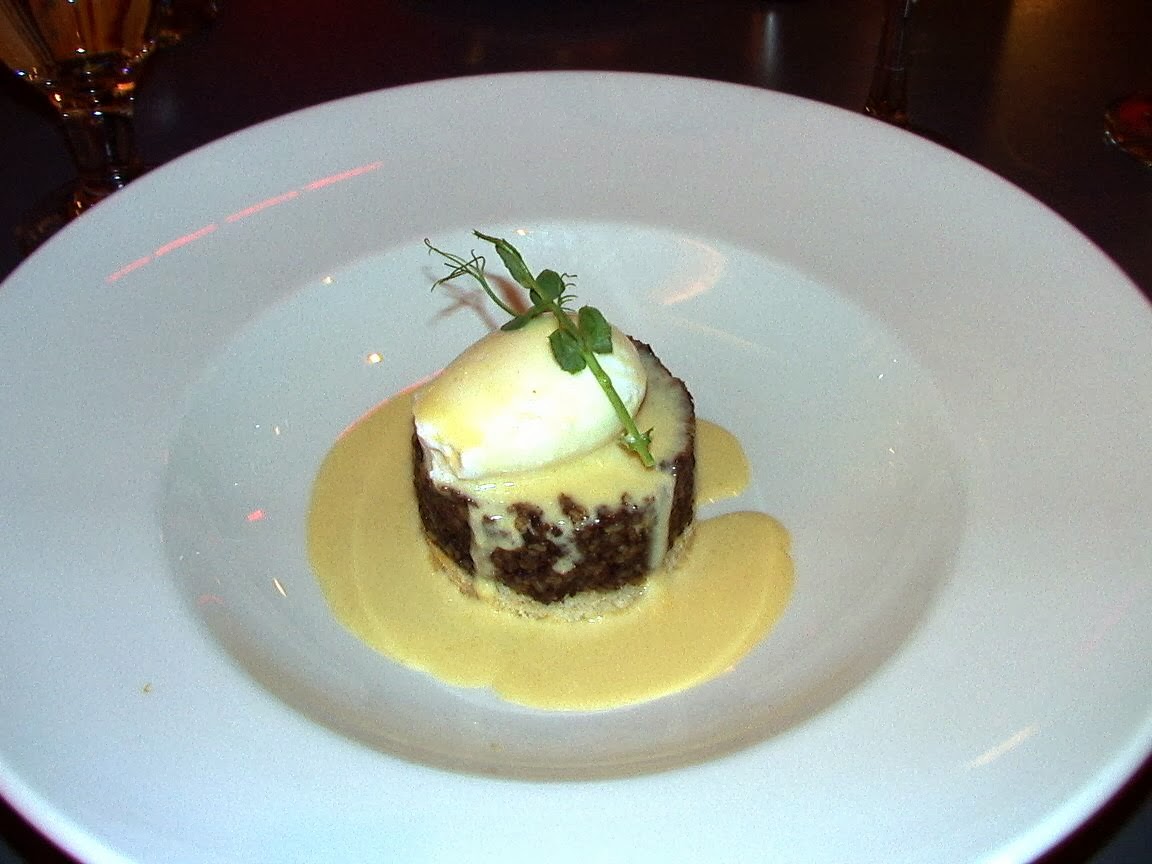 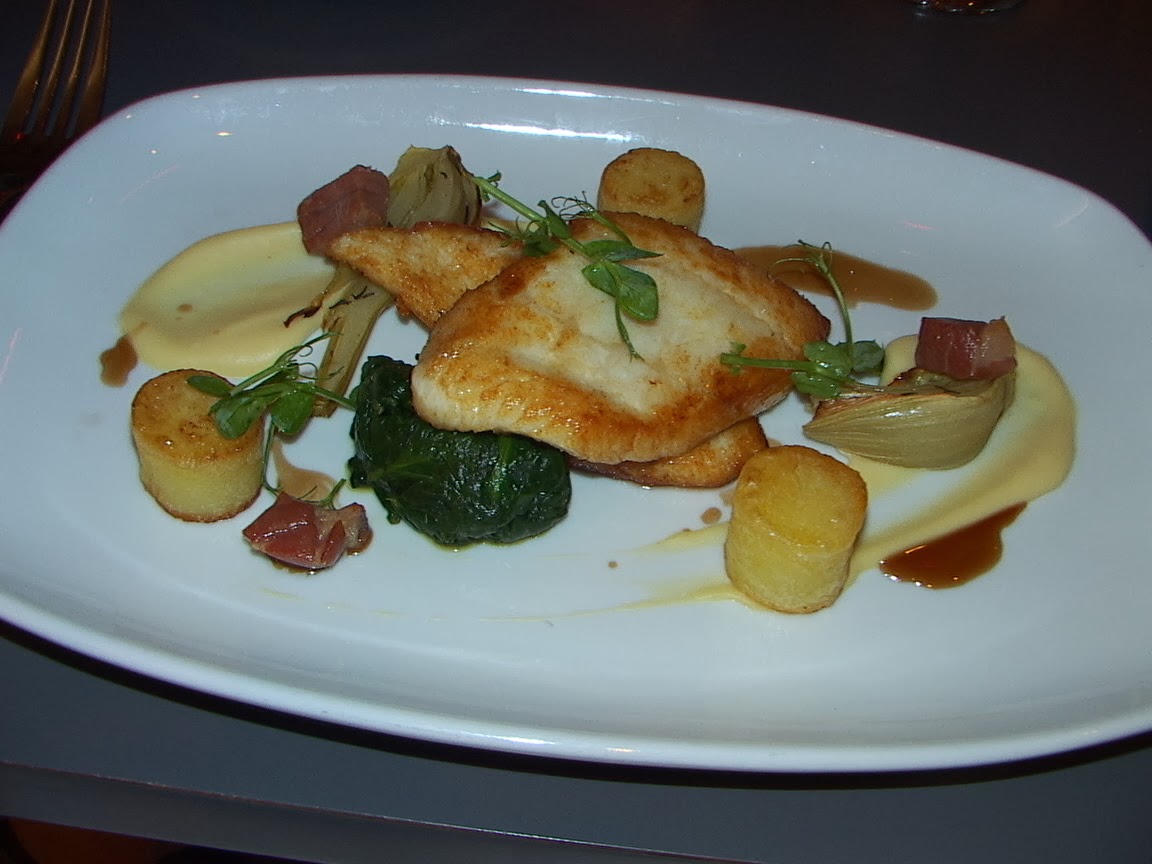 The food was great. A delicious Haggis Burger was a perfect match...and the fish course...Brill...was fine as well. 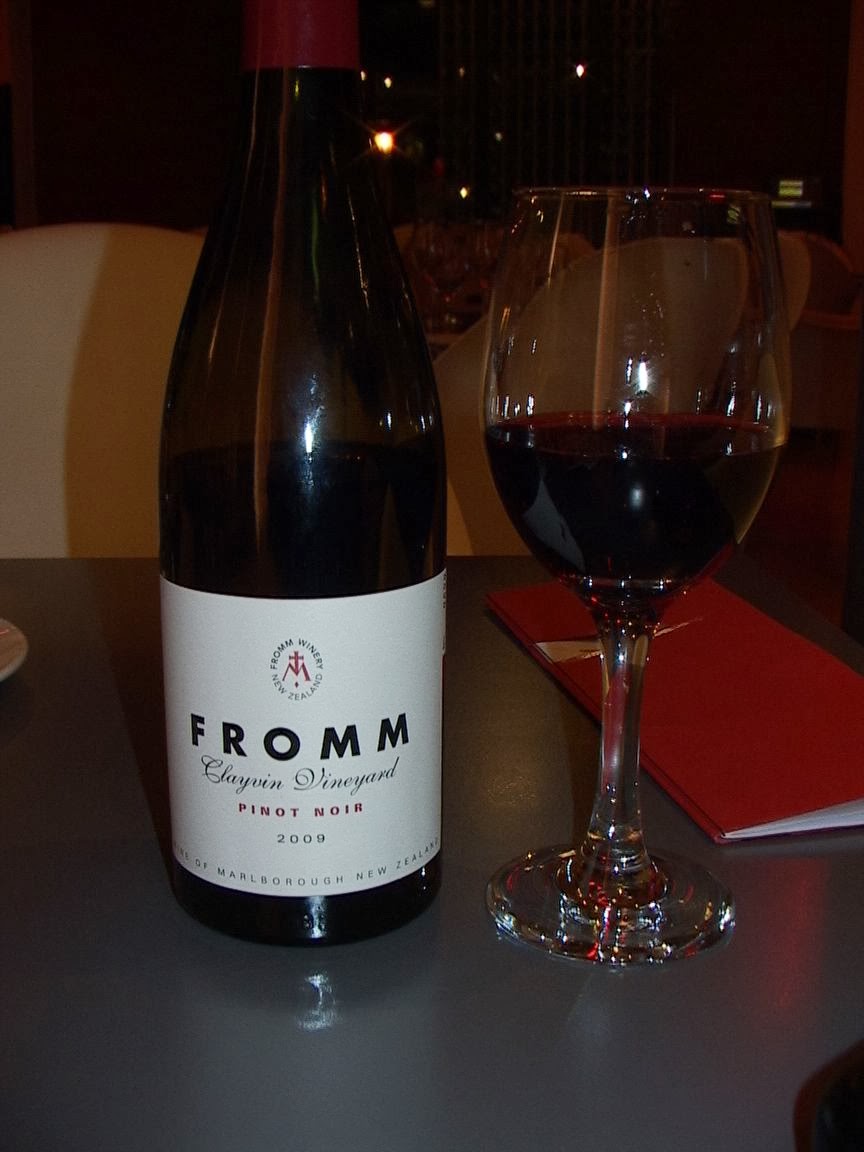 Domaine Régis Rossignol-Changarnier
Beaune 1er Cru Les Theurons, 2009
Really enjoyed this...and been a while since I have gone back to Burgundy for my Pinot Noir. Strawberry and juicy black cherry with some dried herbs.
Grainy tannins...very fruit driven...still youthful...but softening and enticing.
Points 17.25 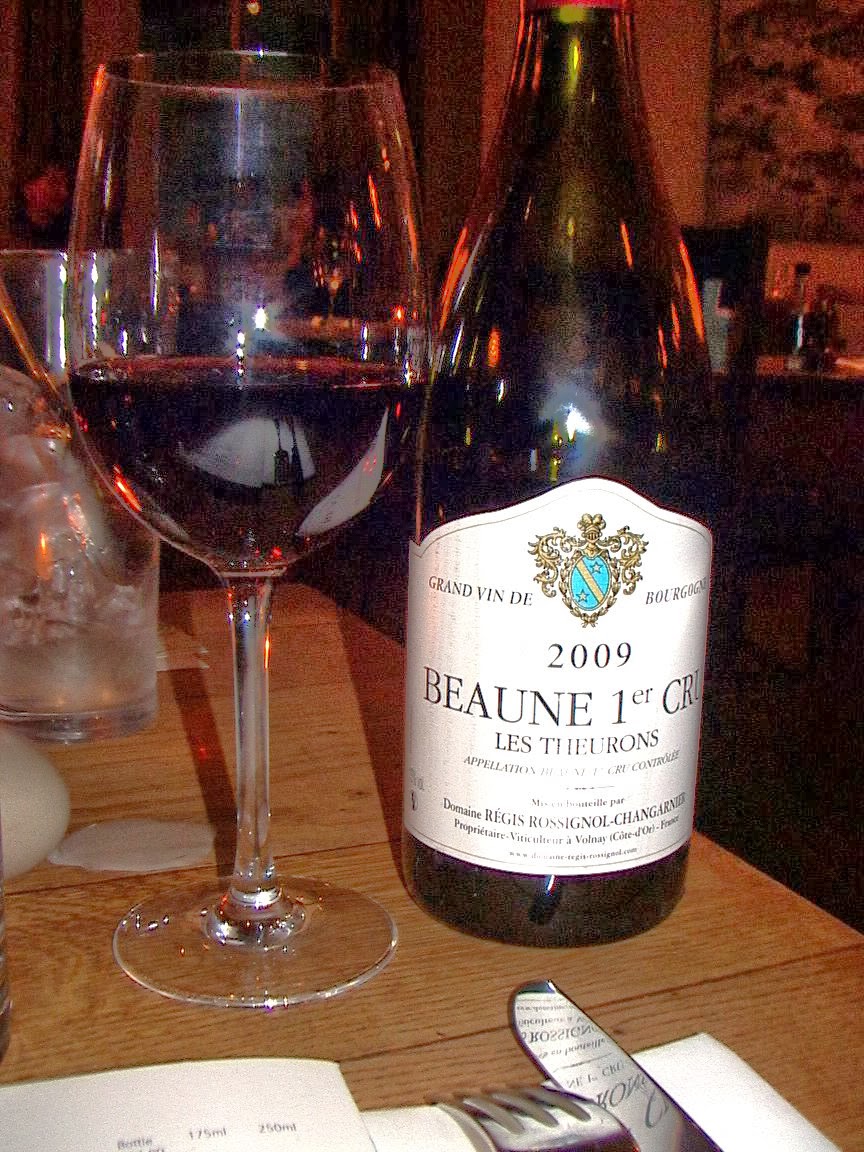 Oakridge Chardonnay 864 2008
Yarra Valley, Australia
A touch 'too much' for me...fig and toast...quite complex...but I was yearning for some minerality.
Points 16.75 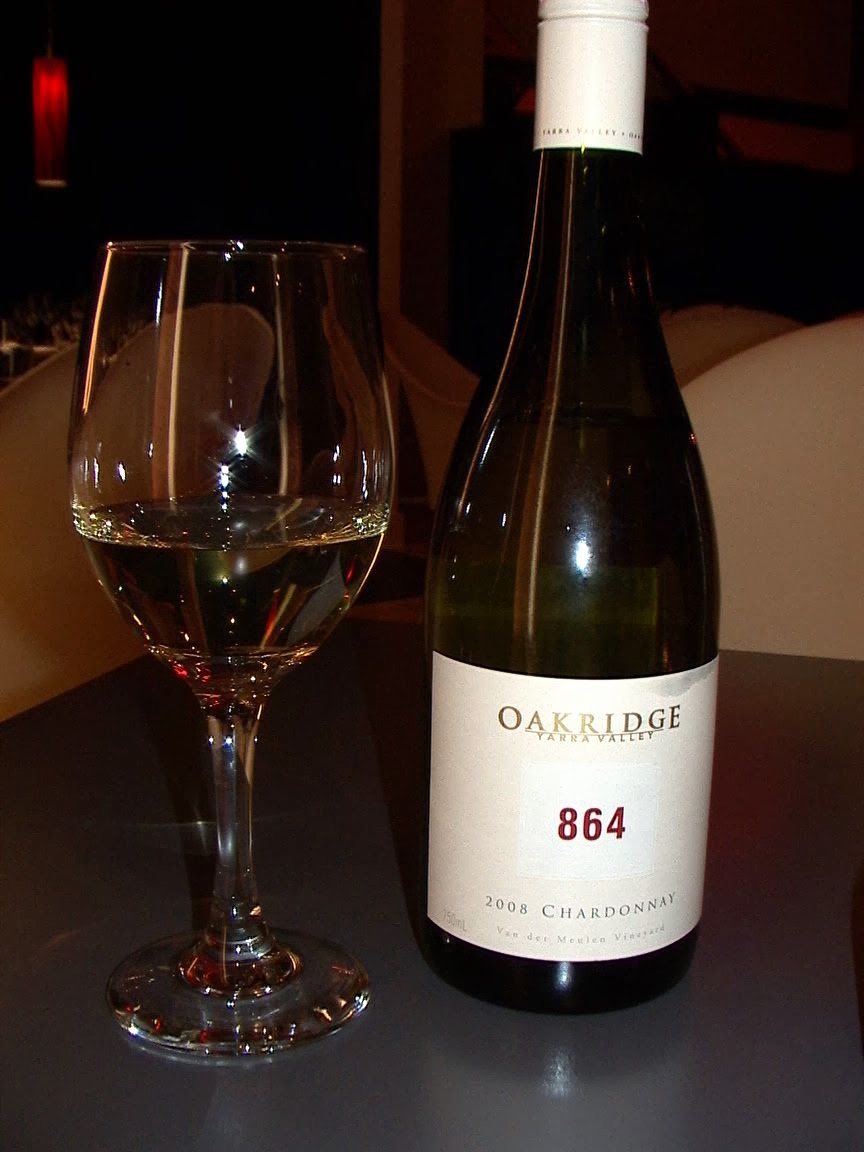 Monday 03.02.2014
Britain has been battered by rain and more rain. The rivers have never been so high. 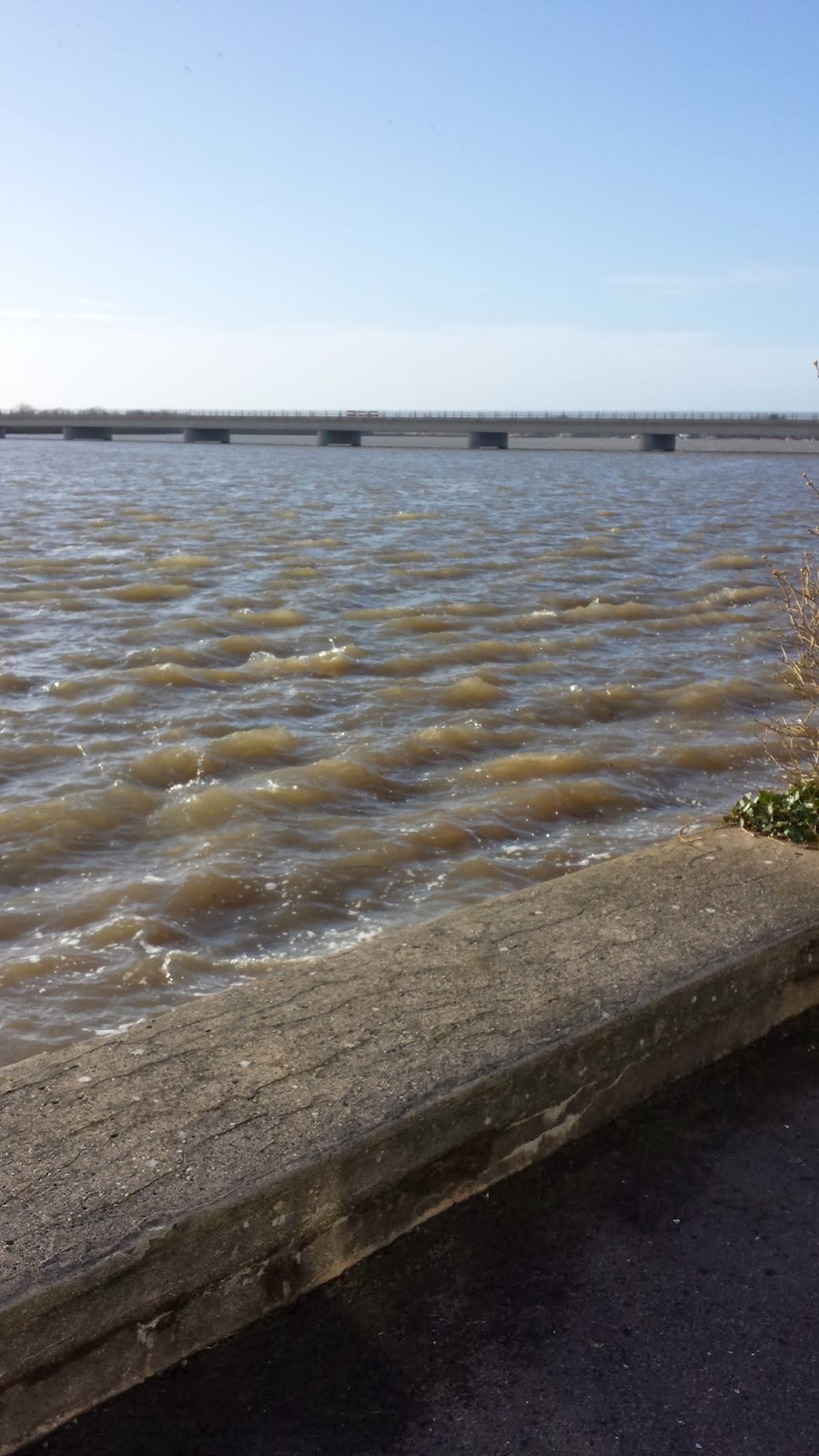 Most restaurants are closed on Monday...but I had heard good things about 'Thai Delicious' in Cleveleys. It was great. Really good clean typical Thai food.


Another visit to the Farmer's Arms was planned...and I had seen a decent 2010 white Burgundy on the list...

Bouton Gilles St.Aubin En Remilly 2010
We arrived at 7pm...and I said if they had the wine we would order the food apropriately. The answer was positive so the food was ordered with fish being dominant. Now...pubs...no matter how upmarket they are...they do not teach their staff the general rules of wine.

The young lady appeared round the corner...bottle in hand...corkscrew half in the cork...the foil cap not cleanly removed. All this before she hadreached the table! She proudly showed the bottle as she held on to the corkscrew...and I checked the neck. 2011 Vintage. 'That's all we have' she said. Even when I am nearly ready to burst I am understanding...and as we had ordered the food...I told her we would try it. The cork was removed and the wine poured...and as I had expected...was full of youthful acidity. No way we were going to enjoy this.
Order the next best white on the list...
Blanco de Guarda Finca de la Reñana 2010 Luis Alegre Rioja.
The poor girl left and returned with a bottle...and...you've guessed it...Vintage 2011.
Nothing for it...change the main course to meat...and order the bottle of Beaune tried on Saturday.
A male colleague appeared and took my order and returned with the wine.
I had evidently scared the young woman to such an effect that she made detours round our table for the next 30 minutes...until I called her over and said 'Could I order a smile?'...which seemed to please.
The other waitress on Saturday had told us she was taking a basic wine course and now knew that Champagne had to be 'shaken' (remuage) before leaving the cellars. All very commendable...but after this evening...surely the basic rules of showing a bottle to make sure it is correct ...and removing the foil so as the wine does not pour over the leaded stuff. Such basics...so please...all upmarket Gastro-Pubs...give as much time to the wines as you do to the beer. Strangely...another pub of the same style has a wine list without vintages...maybe the answer!!!( only joking)
The marinated fish salad  was delicious and very fresh.

The steak partnered the wine well....


Gibbston Valley Pinot Noir 2007
Central Otego, New Zealand
Bold flavours...sweet pure Pinot...dark plums...spicy...silky mouthful.
Points 17.25
As much as I enjoy the 'Twelve'...the glasses are not ideal for a wine freak....to thick...and it does affect your taste.
BUT...
As owner Caroline says...the cost of a glass breaking.....
I always take my own wines to the restauarnt...maybe I should also take my own glass...now that is 'wine-snobbery'...but I don't care...so there! Ha! 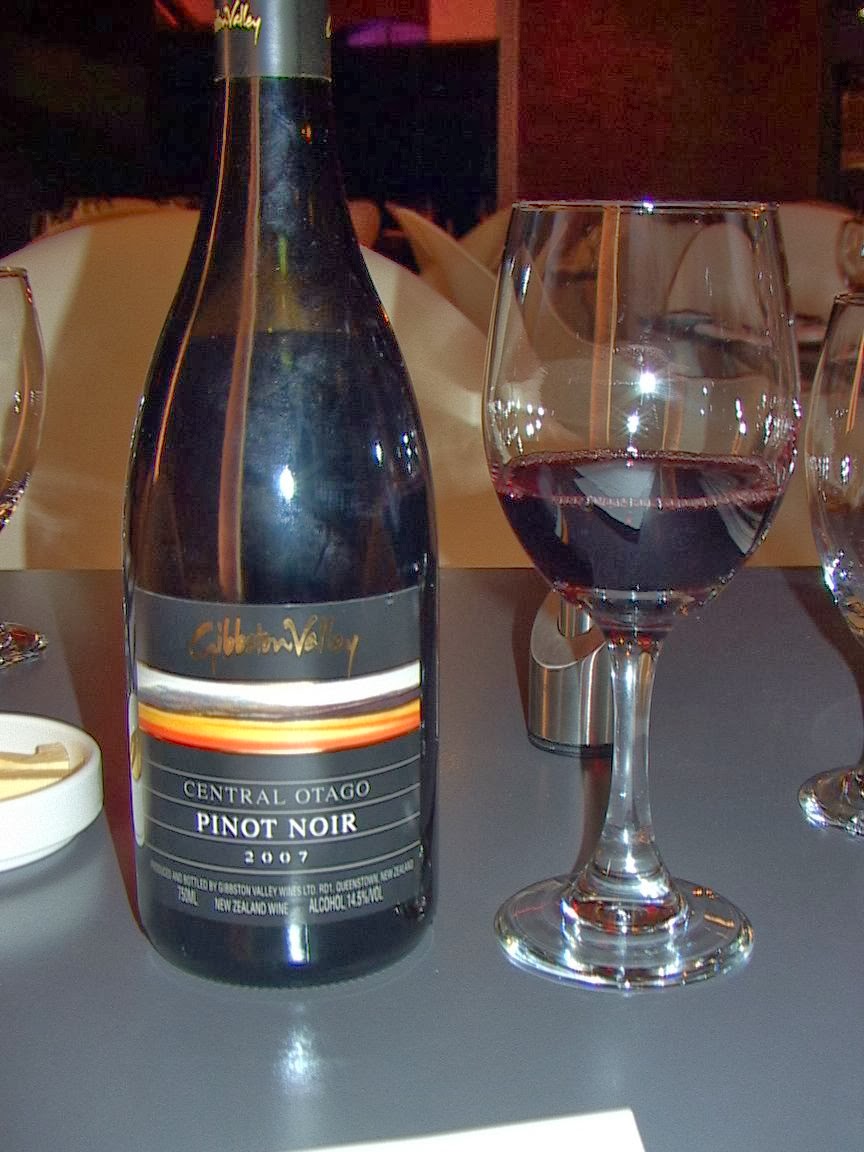 Thursday 06.02.2014
Waether was bright and sunny...and mum and I just drove around all day.
Food..takeaway from the excellent Thai Delicious restaurant.

Schubert Pinot Noir Block B 2010
Wairarapa, New Zealand
Tried quite a few from this property...my style...maybe the German winemaker is the reason!
Intense black cherry and floral notes. Meaty...with smoke and tobacco...quite full-bodied...but then again...a shade of elegance...asking to be kept.
Points 17.25 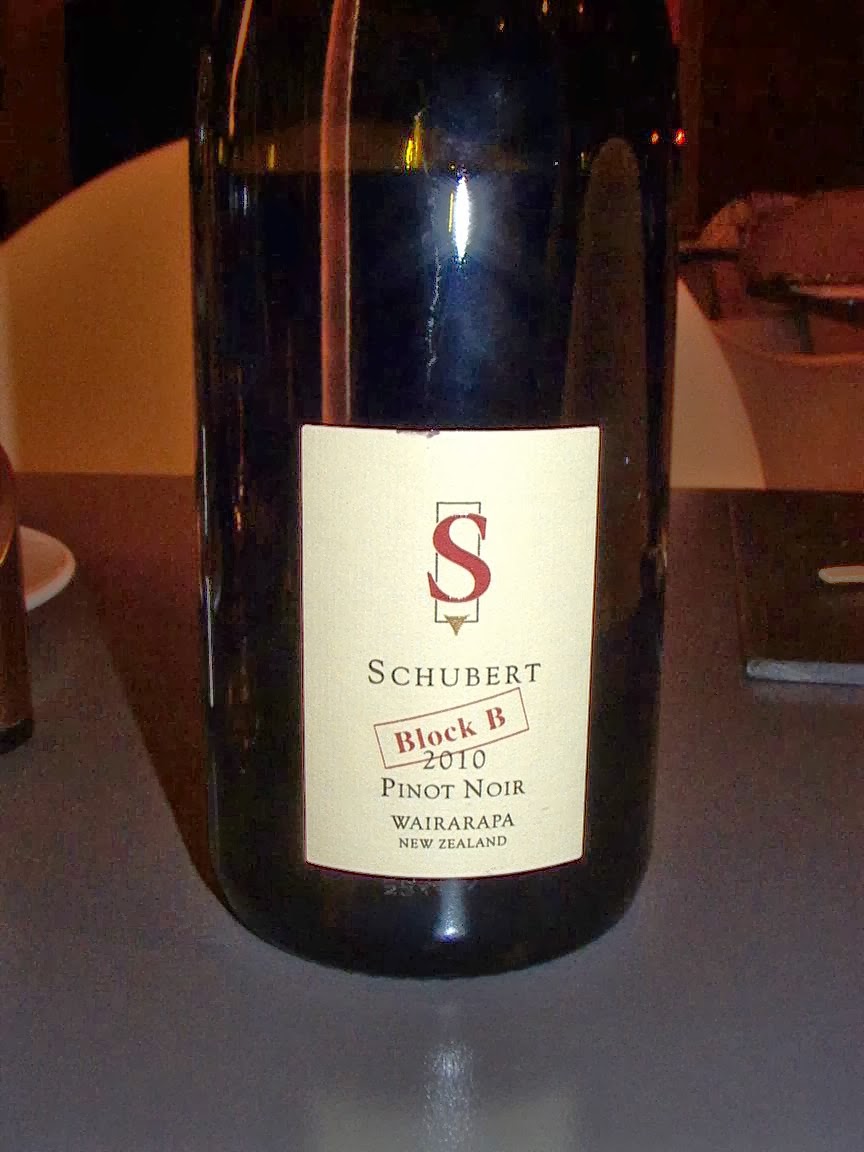 Saturday 08.02.2014
Sunday 09.02.2014
Spent relaxing, watching TV, doing nothing.
I was supposed to take the boat back on Tuesday...but as the weather was predicting sun for ONE day...I took the Monday ferry...and arrived home Tuesday early afternoon.
I ate in the cabin on the way back...buying some nice food at Mark's & Spencers before boarding. Very enjoyable.
A day later the winds were force 9...and a day afterwards...12!!!

Man, was I glad to be back home