No Riesling from Volker

As promised...the next meeting...and Volker had been reading the blog.
He offered to open proceeding...bottle screw cap...and most definitely not a Riesling.
Sauvignon Blanc?...there was some lychees in there...a crazy Sylvaner?...we finally ended up with a Chardonnay. What a beauty... 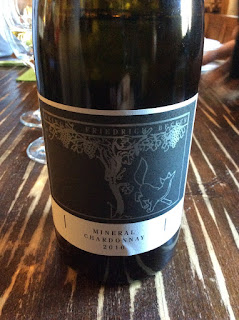 Friedrich Becker Chardonnay Minéral 2010
Pfalz, Germany
Becker reds I know...but...and I miss very little...I had missed this white.
Rich and creamy on the nose...and it does what it says on the body...it offers you super minerals. This was probably a little fat in it's youth...but now there is a complete balance. Still some oak on the palate...but so lovely with it...a crowd-pleaser...a wine-freak pleaser. I could have stayed with this all evening.
Points 17.5 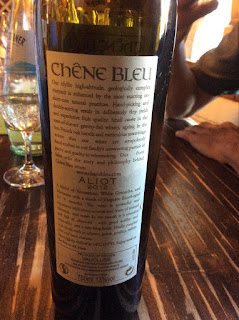 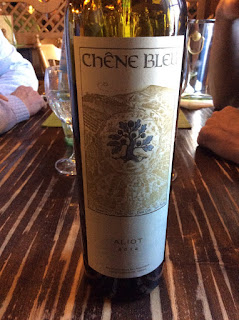 Chêne Bleu Aliot 2012
Vaucluse, Rhione, France
60% Roussanne, 35% Grenache Blanc, 5% Marsanne and some Viognier maybe...but that would mean my maths are not good.
White peach, honey, spicy. Volker craved for seafood with it...non available.
Quite rich on the palate with some ginger...and as always from Monsieur Robert...a wine to test you...just it's bad luck to have followed Mr. Becker
Points 16.75 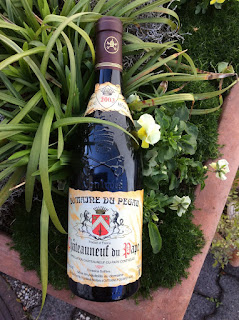 Drink The Wine, Not The Bottle

Late post on our last meeting early April...but as the next one is due...I had better pull my finger out.
Volker always brings a white...and a Riesling...and it is good to have some stability in our monthly meeting. Robert on the other hand always produces some rarity and it takes us a while to nail it down.

Dönnhoff Hermannnshöhle Riesling GG 2014
Nahne, Germany
To be honest...this too young...and was showing its best an hour later as it warmed. I find Dönnhoff's. wines tend to some restsüsse...and in their youth are a little unbalanced. Negatives by side...this was an aggreeable starter. 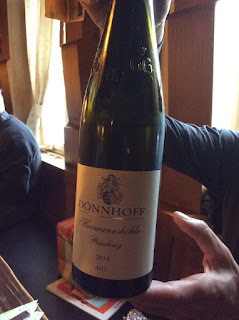 Alfredo Arribas Trossos Tros Blanc 2013
Montsant, Spain
Robert always brings something not readily available...usually from Spain...and he was recently in the area. After we guessed North Spain...it made the grape guess easier...Grenache Blanc...and he told us the vines were up to 80 years old. I can usually taste the aged ones...and this threw up some creamy fruit. Ripe peaches and with pleanty of depth. Very interesting. 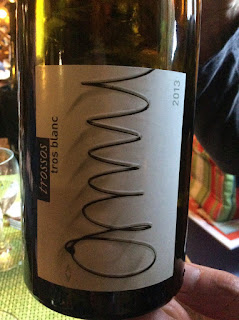 Now...as you know...our meeetings are great fun as we have to guess what is hidden inside the covered wine.
I had been asked to bring a red...and anyone who has been around wine over the last 20 years will know the bottle size from Au Bon Climat. The punt at the bottom is a finger long. The kitchen foil would have been a waste of time. My two friends should work for their success as I have to with their wines.

My red needed a decant...which it got a couple of hours beforehand...BUT....it was decanted into an empty white wine bottle from Austria with a screwcap!!!

This bottle got the kitchen foil...and I was ready to go.
Whenever you are asked to guess wines...you look for all the help you can get...and I guess Volker and Robert eyed what was before them.

They guessed Pinot Noir...and in the normal bottle would have said 'New World' Au Bon Climat.

Now...what do you think happnened? They went all over the world!

When they finally ended up in Santa Barbara County...I nodded. 'But the only wine we know like that is Au Bon Climat...and there are no slim bottles with screwtop'
Did I say there was. My giggles had started by now and I revealed the label.

Laugh...my sides were hurting. They love me for my humour...and even when we said goodnight...I could still not stop smiling. In the middle of the night I let out a roar.


What awaits me in our future tastings?. I will be on my toes!