There used to be a radio program...probably still is.....that was about Desert Island Discs.....you had to choose 10 records you would take with you..and one essential 'extra'. Let's change the idea a little..10 different wines...and a corkscrew...
I'm not going to start listing all the great wines I have drunk over the years that I would pack in my rucksack...but amongst my selections there would probably not have been one under today's priced wine.
BUT...one of the most satisfying things about wine drinking is 'finding' a wine..then being told a price. Well..this was the other way round....and was purchased in Freiburg on our recent visit to the Black Forest. I asked the shopkeeper to recommend a couple of Spätburgunder from the vintage 2005...he handed me a wine and told me it cost Euros 13,--...I took it home to see if it was a 'find'
And so it is that a week later I decided to try it. 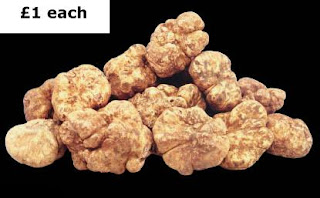 you go to the local market and see some white truffles costing £1 each.. 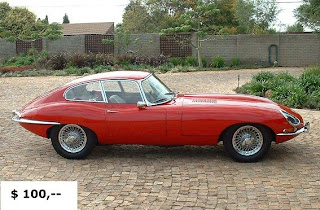 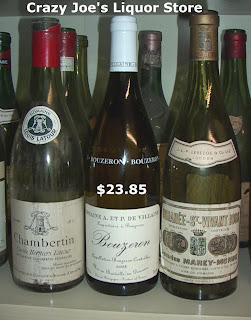 Well..the truffles sound a bargain..unless there is a worm in them..
and I haven't checked the engine of the Jaguar..
and the Aligoté....well..let's say that is the 'dream sequence' in this little story..
rather like Bobby Ewing in the shower on the Dallas soap TV show....some things just can't be true!

'What About The Wine!'....OK OK...but after all this you should be convinced......
'How About Some Notes!'.....who cares..it could be green with 3 eyes and no nose...well,..actually no nose would be a bummer.
I suppose as this is Barry's Wine Notes & Memories and not 'The Rantings Of A Wino'..I had better write something.

The vineyard, in Köndringen, is owned by two guys..Elmar Lehmann und Odin Bauer (his day job is Cellar Master at Freiherrn von Gleichenstein) ..they got together in 2002 and purchased it..with only 20-30 year-old Spätburgunder vines in it...good way to start I suppose.They have since planted Lemberger und Grauburgunder but it's the Sexy grape we are talking about here. Their first vintage was 2003...which had good reviews....but my guess is that this vintage, in my opinion, perfect for the grape..is better. It spends 12 months in Barrique.The name Zalwander in South Baden dialect means 'togetherness'..and so that this young venture has no financial problems..it is run as a part-time concern. Fairy-tale really... 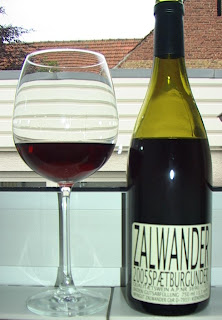 Zalwander Spätburgunder 2005
Baden, Germany
Light-medium colour..with a watery rim...just ignore that all you lovers of thick dark red wines....the aroma is quite complex...Burgundian style...cherries and some vanilla..the palate was medium full with spices, cinnamon..again soft vanilla..and that slight peppery feel on the tongue that gives good Pinot the necessary balance. I have tried many wines at double the price.....are you now convinced? Who wants a bottle sent to them?...even with the postage you are getting a bargain! 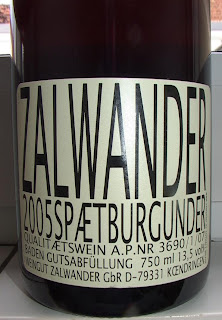 PS...they also produce a 'better' Spätburgunder called EEE..using the older vines....heaven knows how good that one is...

Get in line.. I saw them first!