I was contacted by the local paper a few months ago. They were starting a series 'Valuable Collections'. They had found me through a wine merchant. A meeting (in my cellar) was arranged.
A young lady arrived (at my age they are all young) and a photographer. She paid attention (Chateau Lafite could have been a sweet white wine to her) and as the article has no real mistakes..she did a pretty good job. It appeared Saturday 15th September in the newspaper. I only knew about it when a couple of people in the town made some remarks (Hello Film Star!)
The general translation tells of how I came to be a wine lover. After coming to Germany in 1975 I wanted to learn the language ( and some money ) so I started to sell wine. I knew NOTHING about it! Liebfrauenmilch was all I had ever drunk in England. I learned quickly.. and spent $$$ (actually..all my pocket money.. as I was working in the company by now) drinking some really bad wines. One day I drank a Bordeaux, Chateau Smith-Haut-Lafite 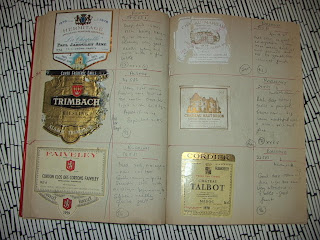 1973 and gave it 17 points. Things got better.......Over the next 20 years I drank, tasted, sipped all sorts and wrote notes. The labels were removed..which meant the bath tub often had 10 bottles swimming in it to remov the **** things.
All were pasted in my 'Tasting Books'...scrap books which now have pride of place in my cellar. Some wonderful memories there. Mid 90's I decided I had paid my dues.. I was just gonna drink the stuff. I did notes if I was asked to..but never kept a record.
Then blogging came along.. which inspired me to start to record my drinking habit again. With all the modern softwear..no need to use the bathroom. One wine I had mentioned in the interview was the Chateau Cheval Blanc 1947. I mentioned I had paid about Euros 150 for it (was not mentioned in the article )..all that was stated was the rough estimate at time of drinking..about Euros 2000,-- I guess that sells papers....and sounds more interesting. 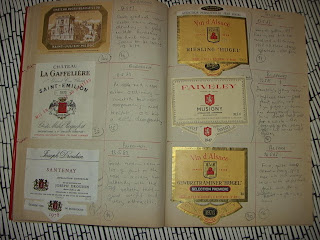 Another wine mentioned was the Chateau Leoville Barton 1871 which was the oldest I had drunk. The article states 400 bottles in my cellar...not quite that much.. and I guess most readers will think they are all hundreds of dollars in price. Not so..again..makes for better reading.
One funny postscript..during the morning that the article appeared..I got a phone call.
'Hello, I saw in the papers you are a wine lover..I have found a wine in my cellar.. 1961 Vintage.. I wanted to ask you if it is still OK'.....my heart skipped a beat..“Long lost Bordeaux found and shared with Barry Fowden“..this would be a great story for the blog. 'Is it a Bordeaux?' I asked..' is it red?' I continued. 'No' came the reply 'it is a German White!!' My suggestion was he phoned again with the exact details..but unless it was a Trockenbeerauslese..he should not build up any hopes. Maybe I should start a hotline for amateur drinkers..you sit in a restaurant..the sommelier is scaring you..so you phone the hotline...start of a career to help finance my hobby maybe.. I doubt it.

Below the scanned article..or you can find the internet version HERE 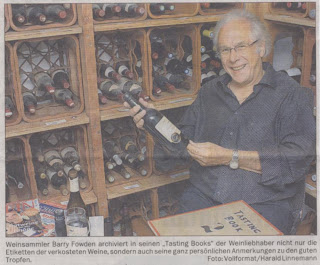 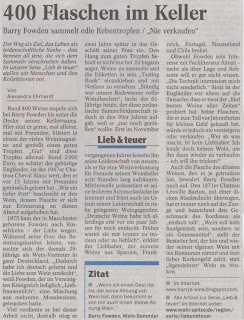 What an excellent and amusing story!