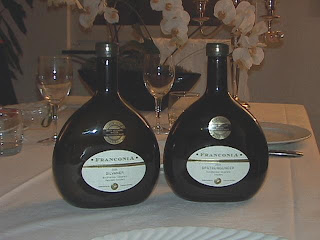 'never knew you were a wine expert..we can't just give you a 'bottle' anymore'. Anyone in business will know what I mean..you receive some real 'rubbish' at times...it's not the amount it costs..just a little more thought could go into it. One contact gave me a bottle of Sekt (German Sparkling Wine) for Xmas 2006..not my style anyway..but this particular bottle was disgusting!..After one of the staff read about my 'hobby'..and we were chatting...I said..'Honestly..tell your boss..don't give me anything at all..rather than the same again'..well..you gotta laugh..by Xmas Eve 2007 I had not received anything..that's fine..no big deal..but I needed a special calender so asked the staff member if they still had one..he asked if I had received the wine yet..I told him no..as I thought my words had struck home...well..it turns out it was just forgetfulness as the company had moved premises and the usual chaos attached had meant no pressie for lil ol' me. So..I received my delayed gift..and with a visit of 2 friends who are not wine people at all and would be happy with 'a wine'...I decided to open them both.
The Winzergenossenschaft has recently been awarded 'Best Co-op of the Year 2007' in Germany and have a large range of wines.

Franken is the home of the Bocksbeutel bottle.
Both bottles with glass closure. 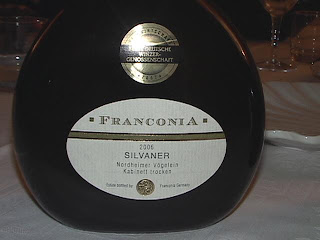 Franconia Silvaner
Nordheimer Vögelheim 2006
Franken, Germany
Not a grape I would choose anywhere..but Franken is noted for making fine wines with this type...Pale colour...some spices and fine middle fruit..and good length for this 'basic' wine from the vineyard.
Points 15 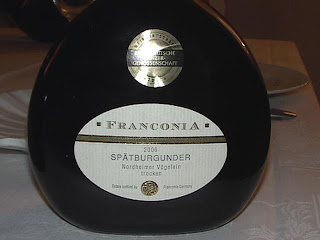 Neither would have me rushing to re-buy...but good for the price range..and I enjoyed them more knowing some thought had gone into the choice.

Hello barry,
Thank you for the report.
I must admit that I have never tasted a wine sealed with glass. I would expect that it does not age well -- even over the course of two years.
Here are other impressions if somebody else is interested in the glass idea.

Hi Estelle,
Both wines are now ready...so I doubt whether anyone would keep them any longer...