As the blog is called 'Wine Notes and Memories'.. I had planned to post this memory over the next few weeks. That it's appearing now is due to a post from fellow blogger Joe who's guest blogger had a corked Magnum of Chateau La Gaffeliere 1996.
Back in 1991 I was on my way back from Portugal by car...with my brother-in-law Axel. We drove as far as we could the first day through Spain..and as always..planned to 'dawdle' in France. We arrived at our first stop in the Rhône in the village Rasteau...Restaurant Bellerive. It was quite late..so no real time to browse the wine-list. I asked the sommelier to recommend a white wine ( Axel does not drink..so I choose a white in these circumstances to go with the whole menu). I can't remember what it was..but on opening it was obvious that it had a fault...caused by the cork. I checked the wine-list quickly and chose a white Pape which was brought to the table without any questions asked ( you have to be 'positive' in these situations or the waiter may find excuses).
The next day we 'slowly' drove around the vineyards and then set off to stop number two in Bourg-en-Bresse in Burgundy. Checking the wine-list I found a white Hermitage from Chave from a fine vintage and was really excited as it was nicely priced. The bottle arrived and was opened. Now Hermitage Blanc can be an acquired taste so I gave it a chance.. and accepted the wine..I then spent 30 minutes swirling and praying..but neither helped..the wine had 'cork'. I called 'madame' and explained and she 'reluctantly' agreed to take it back. As the meal was arriving I had to quickly order another wine...but the promise of a great evening's drinking remained empty.

My brother-in law had quirmed the first evening..he half-disapeared under the table on the second..but he knows I know my wines...so didn't disown me.
The third day we hardly drove at all and ended up at Greuze in Tournus...a restaurant I had visited before..and I always took the menu..as the elderly owner has had plenty of practice with it and 'a la carte' could be disappointing. He had a good selection of half bottles..s 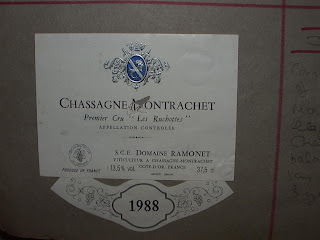 o I decided on a half of white Burgundy... Chassagne-Montracht Les Ruchottes Domaine Ramonet 1988 and a half of red burgundy.I knew the waiter..and as I ordered I asked him if both bottles were in fine condition..explaining my previous two days to him. Both excellent choices Monsieur..he replied. The white arrived ..was opened.. I smelled..and my twitching nose told my relation that all was not well..he went ashen. Sorry Axel..but it is corked. The sommelier tried the wine..and agreed..a corked wine. He quickly returned with another one..which was perfect...Points 17 and I noted room for improvement. 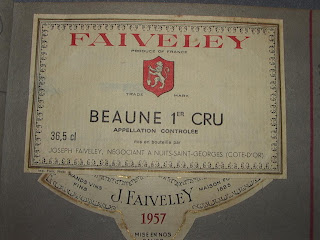 I suppose when you have been drinking wine for 30 years you are going to get your fair (or unfair) share of bad or corked bottles...but 3 in 3 days was testing my resolve.
Maybe Joe and his guest have days like these ahead of them..I hope not.

Barry, you are a magnet for the corkers! I also have prayed for a corker to not be corked, but it never works...FYI, it was my guest blogger Lloyd who had the corked magnum. Cheers!

It certainly sounded like a memorable three days of drinking!
If Australia follows the trend of the last few years it may eventually be cork free. . . Though a fan of stelvin and diam I concede that a perfect cork (taint free and perfectly hermetic) is still hard to beat.