You're moaning again..what's wrong? Is the wine bad?
No..not really..
Well then, stop moaning. Is it thin, weak, watery? 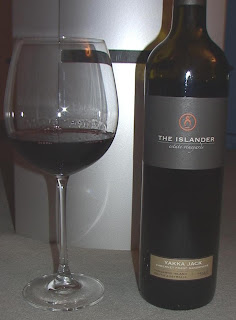 No..No..none of that..it's just.......
Has it been highly rated?..
Oh yes..Parker probably gave it 92....James Halliday gave it 94..
Well....they can't be wrong..
It's not all about right and wrong..it's about personal taste and style.
Tell us more about this wine then...
Well...it's a blend of 73% Cabernet Franc and 27% Sangiovese....and has a French nose and an Italian body..
Charles de Gaulle and Sophia Loren you mean...
NO!...my choice would be Sophie Marceau and Claudia Cardinale...but let's
get back to wine...
The Islander Estate
Yakka Jack 2004
Kangaroo Island, South Australia
This winery is on Kangaroo Island and is owned by Frenchman Jacques Lurton. 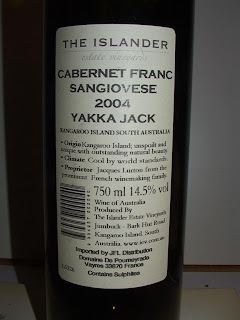 The first whiff is the Cabernet Franc..cedary oak;
as you work your way to the body..the Sangiovese takes over...velvety and smooth, some chocolate..returning to the nose..the Sangiovese is showing now..no sign of Monsieur de Gaulle anymore. Ripe fruits throughout..and I would have prefered the Cabernet to have remained more dominant( I believe they are increasing the amount for the 2005 vintage)
BUT..the old story for me..1 or 2 glasses..then I need a break..
I drank it over 2 days( it held up without any problems)..
would I buy it?..no...a one night stand..unless Sophie really begs me to...
Points 17.5

I've had a few one night stands with Lurton around the world...