Name me one German wine region.... 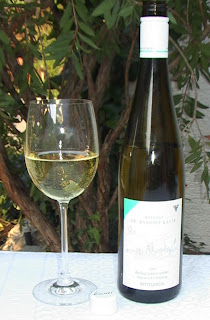 Mosel..you answer...Ok..another...Rheingau, Pfalz, Baden, Franken..maybe Ahr.....now you are struggling..(unless you are a complete wine freak). Mittelrhein would not be in there...If it is..name me one grower......see what I mean. The wines were never that great...bottled only for the masses or used for that 'sekt' stuff. The renaissance was started by Peter Jost von Hahnenhof in Bacharach...and has continued with a whole host of youngsters bringing quality to the area. One such grower is Dr. Randolf Kauer..also in Bacharach. He has vines in some of the best vineyards in Mittelrhein
The Spätlese trocken 2007 was impressive...so I was looking forward to the Kabinett. I wrote recently about the different 'styles'..what is dry etc..but if I had to draw a yardstick..the 2 wines from Kauer are what I expect to get....from the info on the bottle. 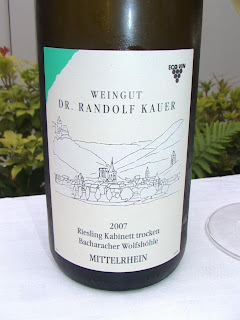 As the Dramatics once sang.. 'WHATCHA SEE IS WHATCHA GET'!
Kauer Bacharach Wolfhöhle
Riesling Kabinett trocken 2007
Mittelrhein, Germany
Aroma of green juicy apples..touch of lime...steely...is a perfect way to describe it.
There is some banana fruit trying to force it's way through..but needs a few months to grow....the acidity is lively and racy...but not over dominant..as I said..it is what it says it is.....
Points 16.25

Look out for the wines of Jochen Ratzenberger (Weingut Ratzenberger). He's simply the man when it comes to Bacharach and Steeg, maybe the entire Mittelrhein for that matter. His Wolfshöhle fruit is reserved for fruity/noble style Spätlesen and Auslesen, though it will make an appearance in his village level Bacharacher Kabinett and Kabinett trocken wines as well.

Hi David..I wouldn't have thought any Mittelrhein wines would find their way abroad....
will keep a lookout for Ratzenberg...not tried them as yet