The Nelles estate is located in the commune of Heimersheim in the Ahr wine-growing region in Germany. The Nelles family has been involved in wine production for more than 500 years. Current owner Thomas Nelles served an apprenticeship in winemaking with Julius Wasem in Ingelheim, then worked at various estates including Adeneuer, before going on to study viticulture and fruit farming in Weinsberg. On completion of his 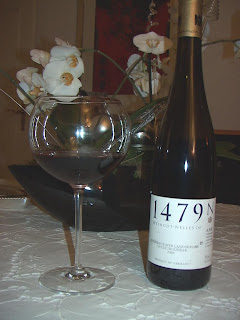 studies, he took over the estate from his father in the early 1970’s. Soon after that, the manor house, which had been built in 1950, had to be demolished to make way for a road. When the Heimersheim co-operative merged with the Ahr Winzer E.G. co-operative in 1976, and gave up its production facility in Heimersheim, Nelles had the old co-operative buildings, except for the hotel, demolished, and rebuilt his estate on top of the old cellar. The vineyard area totals just on seven hectares, with holdings in the top-rated Burggarten and Landskrone (Heimersheim) sites, as well as in the Schieferlay and Sonnenberg (Bad Neuenahr) sites, which are however usually not stated on the labels. Wherever possible, the best red wines are not filtered before bottling.

Nelles Heimersheimer Landskrone
Spätburgunder 2003
"Grosses Gewächs" trocken
Ahr, Germany
The striking bold labels are emblazoned with the date of the birth of the winery (1479). The B52 is the top wine..with a gold capsule...which this bottle had..but there was no sign of the B52 figures. 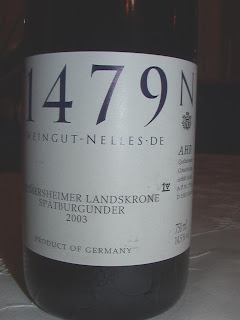 Medium deep with browning rim; sweet strawberries, wild fruits..slightly burnt aroma...which seems to be consistant with Ahr wines; first impression on tasting..some liquorice, concentrated rich attack..The Landskrone vineyard at the eastern end of the Ahr Valley – has steep slate soils warmed up in the sun, storing heat which is released during the night, making some of the wines carry quite a punch! With the vintage being one of the best for the grape in Germany...this is quite full..with ripe fruit..and showed it's fullness by being just as good when tasted a day later.
Points 17.75
The 18 point mark is, for me, a bit special..it almost made it...