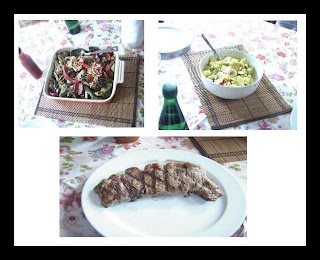 Having taken a break from the grape for 7 days I was looking forward to dinner at a friend's house. Volker would prepare the food and Robert & Axel would help with the drinking. I would bring the wines...and had spent a couple of days visiting my cellar. The white had been a quick decision as had the Shafer...but I had been undecided about the Rhône. The four wines had been delivered carefully by car at 5 pm and I was on my bike an hour later to be met by the three friends. Four oldies with hardly a wrinkle....the wines I mean.
What a night! 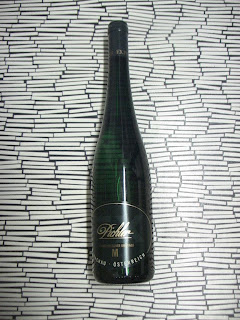 F.X. Pichler Grüner Veltliner
Smaragd 'M' 2000
Wachau, Austria
Opened and decanted at 4pm...and the colour reminded us of a hospital sample. Gold...nose is rich and intense...bottle age character...slight trace of botrytis...they started guessing...a dry Bordeaux or a mature Chardonnay. I had decanted for 2 reasons...the first to give it air and the second so that they would not see the bottle. They know my love for Grüner Veltliner. The first sip showed a beautifully layered wine...viscous...the minerals of youth all but gone leaving a jewel of a wine which is still lively...great length of flavour...a wonderful feel in the mouth and a very long finish that leaves you amazed. Volker had decided it was a GV... 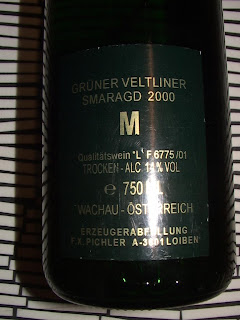 but as I had mentioned that no wine was younger than 10 years old...that had thrown them at the start. Ah...but this is one of THE top wine properties of Austria. The bottle was revealed as they were very impressed. Everyone marked over 18...Robert...the Wine Merchant gave it 18.5 as did Volker.
Points 18.5...a great start but could I keep it up? 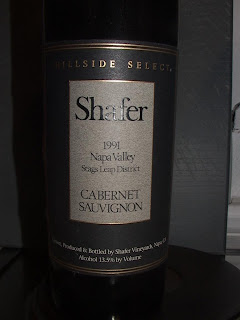 Shafer Hillside Select
Cabernet Sauvignon 1991
Stag's Leap, California, U.S.A.
I had drank the 1992 with Volker last year...and it had been very good. This last bottle of the previous vintage had been thought about since then...and as steak was on offer...it seemed the perfect moment to open it. Remember the word 'perfect' as we continue... Opened at 4pm I had decided not to decant. Still full in colour...intense cedar...loads of herbs...tobacco...lovely balance...cool...silky...currants...tannins practically gone...a super length and filled out on the palate...just 'à point'(perfect) at the moment...not yesterday, not tomorrow...just now...that is not to say you wouldn't enjoy this still in 5 years...just that there are those wonderful moments with wine...where you know you made a wise choice...this is super. Robert was thinking Bordeaux 1990 or 1992....so I told him the vintage and he, knowing his Bordeaux vintages, said it could then not be French...had to be New World. He was VERY impressed and gave it 19 points. Volker gave it 19.5
Points 19 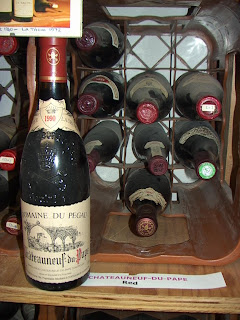 Domaine du Pegau
Cuvée Laurence 1990
Chateauneuf-du-Pape, Rhône, France
I also have a bottle of the Cuvée Reserve from this vintage. Which to open?...the decision was made by the fact that the Laurence spends more time in wood and the Reserve will hold for a few 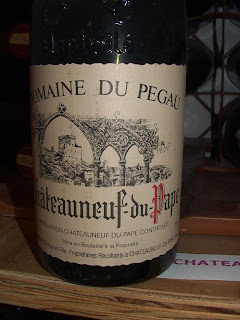 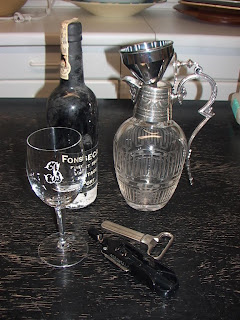 Fonseca Vintage Port 1966
Douro, Portugal
I haven't purchased a bottle of Vintage Port for almost 20 years now. Why would I?....as my early years of wine drinking were spent using every bit of extra cash in laying some down. 'Will always be saleable and drinkable' was the advice. So...there are still lots of gems in the cellar. This is only because you just don't open a bottle on the spur of the moment. It used to be a Xmas treat but unless I have a real wine drinker around...I leave it for a special occasion. Checking the cellar...the decision was going to be tough...but I decided on the Fonseca as I had 2 bottles... To open a bottle of aged Port you need various 'tools'. A corkscrew, although this is rarely needed, a 'butler's friend' version...a decanter and a filter. As I said...a corkscrew is superfluous...and as this cork was 'moveable'...I tried it with James (I don't give all my corkscrews names). All he did was push the cork into the bottle. No panic...I have been here before many times with old port. Slowly pour the sweet juice through the filter into your old 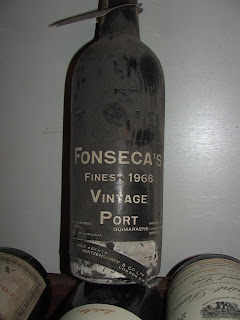 decanter. Then...leave to breath for 24 hours. The great thing about Vintage Port is that it can hold for days...even a week...so you could open a bottle and drink a glass every night. However...I am of the opinion that you have to drink it with good friends! I had sipped some on decanting so knew all was OK.
Deep red/brown colour...a combination of sweet fruit and restraining acidity. The tannins are all but gone...the palate throws up some liquorice....damsons...aniseed...dried berries...silky...caramel...and there is a superb long finish. Axel said he didn't drink port usually...meaning the stuff that stands around in the kitchen..but...THIS BOTTLE he did like. Robert & Volker were tying to guess the Vintage. I reeled off the best vintages (yes...I do know them off by heart). 1963, 1966, 1970, 1977, 1983 & 1985. Volker opted for a 1970 and Robert...who I had turned on to Vintage Port many years ago...chose 1966. He grinned like a cat when I showed him the bottle.
Points 19
The group know they will get something good when I delve into the cellar...but four wines over 18 points! A memorable evening! 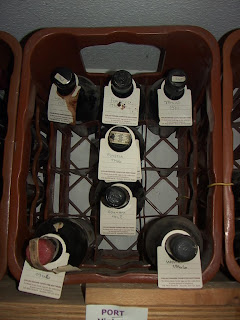 The Port section of my wine cellar contains the following:

We need to drink it more often!

I was very impressed by the Pichler "M", too when I tried it recently.