I have been drinking wine for over 45 years..and in the early days I dealt 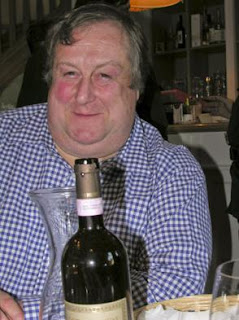 with the wine trade in England. My search for older vintages lead me to a couple of merchants..one being Reid Wines...a few miles south of Bristol, England. I had lived in Bristol before I moved to Germany...so I was back there a couple of times a year. I usually ordered the wines...then picked them on my visits (I drove over). Co-owner was a guy called Bill Baker. Now..when whoever made us all..decided to build Bill...he didn't cut corners...and the end product was a one-off! Bill passed away in January 2008. Now..before you think this 'Memory Lane' is going to be a sad post. Forget it. Bill Baker probably never knew the meaning. 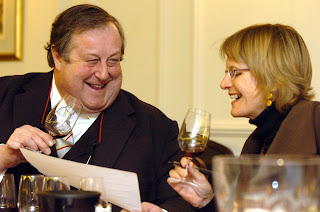 The Telegraph obituary report at the time....and I smiled as I read it...mentioned him taking a few cases of vintage wines with him when he traveled abroad. I once arranged to meet him at a top restaurant in Bristol who he supplied wines to. I waited at the bar with my glass of something. Bill 'rolled' in. As I mentioned..he was large..but carried it well. Talking about carried..he was carrying a picnic basket...We sat at the table and he opened it...to reveal 5 bottles!! Now I remember..at least I think I did..only drinking one...where the other 4 went to...we can only summise. Reid Wines was in the picturesque village of Hallatrow...in an old converted Mill. If I called and said I wanted to come over..the answer was..'be here at 11.30 for lunch'. On arriving...a table outside by the stream..some old oddity of a half-bottle as an apéritif..with some paté de Foie Gras..then a decent red. Another memory..which I should try to forget...was driving a few miles (a few more that it should have been)..meeting him for dinner...and returning by car along misty country roads...would never do it nowadays...ah..the recklessness of youth! Another memory is of joining him at the top country house 'Gidleigh Park'..for some memorable wines. He once visited me in Germany. We had a guest room..and a normal size bed. He managed. He asked if he could use the bath...don't ask me!! My wife cooked us dinner...and 'bonvivant' was had by all. He was 'expressive' about wine and people...and said if a wine was crap. He maybe annoyed a few..I never had a problem with him...oh yes I did...trying to keep up with him. On one visit he told me about a regular meet of all local merchants...once a month I think..where each one took along something special. He kindly invited me along..a privilege..and the rest of the group accepted the 'extra' visitor. Great wines...although my memory goes back to a whisky..which I never drink...it was a malt..about 40 years old..and as near to a great Cognac as you can get. The wine trade is full of 'odd' characters...it must be the liquid. Bill Baker was the last of a long gone style of merchant/gourmet/imbibber..call it what you like. They don't make 'em like that any more. The materials are no longer available! Telegraph report here

Enjoy the video with Jancis Robinson