Uli Metzger took over the reins at this property in 2010 from his father and has invested intensively....not only in vats and barrels...but in the marketing. Of course...with a name like Metzger (Butcher) the oportunities were there. Whites were the first that you took notice of...but now..he's hit the red wine trail. Four wines were released from the 2012 vintage...three of which have the added names 'Prago', 'Arthos' and 'Melandor' added to the labels. The marketing structure was aslo changed...the wines now more readily abvalable. He is proud to offer the house wine to well know TV Chef at his 'Bullerie' in Hamburg. A lot has happened in a few years! 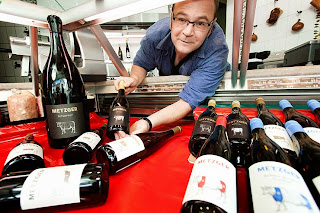 Having received a few bottles was waiting impatiently to try the 'Arthos'.A wander to a local eatery gave me the chance. 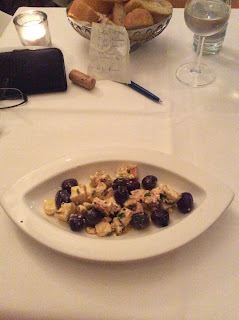 A light plate of Greek Feta Cheese and some Olives...fresh bread...and a first smell and sip. 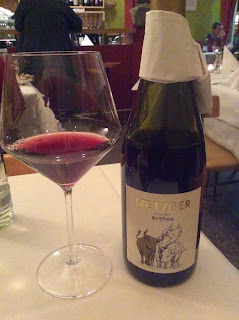 Uli Metzger Pinot Noir 'Arthos' 2012
Pfalz, Germany
Cherry red in colour. Ripe strawberries rise from the glass...and a slight prickle hits the nose...as though it is still fermenting. This turns out to be part of the whole as the wine remains light-footed throughout the evening. The palate shows velvety and juicy fruit...lingering as you swill and swallow. Never becoming heavy it is already a treat but plenty to hold this for 10 years or more.
I believe the consultant on this one was Erich (H.E.) Dausch who knows his Burgundy wines. He has worked with Friedrich Becker and I have had some fine wines whenever he has been involved... 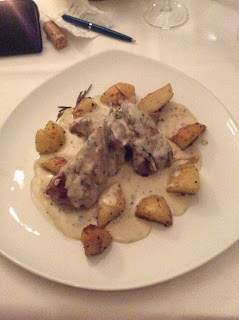 A main course of Spanferkel (Suckling Pig) with a Gorgonzola Sauce was the next test. The secret with that cheese is to make sure the 'blue' does not dominate. The meat was tender and the sauce perfect.
The wine meandered it's way through the possible minefield and came out unscathed. It really thanked the meal as it could show it's full potential.